Gliding in Taranaki began with the formation of a gliding section of the New Plymouth Aero-Club in 1958 using a Slingsby T31 tandem seat trainer ex the Auckland Gliding Club. Club Tiger Moths were used as towplanes and Banger Martin was the Chief Flying Instructor.

Formation of the Taranaki Gliding Club

In 1960 the gliding section was wound up and the glider sold, leaving gliding enthusiasts bereft. So they formed their own club with Harry Smith the first president and Batch Collins the CFI and a Sleicher Rhonlerche two seat trainer ordered from Germany. Flying began in 1961 from the Bell Block airfield. A winch was built and used from time to time.

Unfortunately, a series of prangs interrupted activities and wasn’t until late 1966 that flying resumed on a regular basis, once more at Bell Block, Banger Martin the CFI and winching the means of getting airborne. From the middle of 1967, the club often hired Bob Shewry’s Tiger Moth ZK-AJP for aerotowing which gave longer flights.

Bob Struthers joined the club early that year and his dynamism was to have a profound effect on the Taranaki Gliding Club.

Under Bob's leadership, a towplane and a single seat sailplane were purchased, a site suitable for gliding was located at Kaimiro and a four vector airfield formed out of swamp, scrub and rocks together with building of a hangar and clubhouse. It was an extraordinary time and for a while, the club owned a Caterpillar D4 bulldozer. Fund-raising by various means was always carried out until the early nineties, enabling the airfield construction coupled with periodic replacement of aircraft.

Flying was never neglected. Nestled close under the mountain, the airfield was well placed for thermals and wave from the southwest and pilots over the years, enjoyed some memorable flights. As usual, Bob lead the way in this and in local flying, competition and in Australia, was the first in our club to achieve the Three Diamond Award for soaring achievements and fittingly, the third diamond for height was from our German Hill Airfield.

Mike Gibson, Bob Struthers and John Carter enjoy a beer at the end of the day outside the German Hill Clubhouse.

The airfield was leased from the original owner, Leo Wytkin, for a peppercorn rental of $1 per annum, recognising the club’s efforts in providing graze-able pasture. This was to change later, until ultimately the club would be required to pay 10% of the annual commercial rental. This was to prove too much and the club relinquished its rights to fly every weekend up to 100 days per year, instead, to a grace and favour basis and began more flying at the adjacent Norfolk field.

A modern winch was built and winching operations began at the Stratford Airfield. At this time, the Norfolk Aviation Sports Club began to re-establish itself, using the TGC towplane and was soon competing with the Taranaki Gliding Club for members and public interest in trial flights.

The Taranaki Gliding Club formally established itself at the Stratford Airfield in 2002 and in 2004 with a grant from the Taranaki Electricity Trust built a hangar there. This building was completed with concrete floor and aprons in July 2005. Many clubs and organisations throughout Taranaki have benefited from grants made available by this trust and the TSB Trust. Our club has been no exception. The fund raising exploits of yesteryear unlikely to be repeated in today’s society.

The move from German Hill took its toll on the club, walking away as it did from its infrastructure there, losing its operational raison d’être, aircraft and not a little institutional memory in the process.

The club is now happily established at Stratford,  an effective gliding club reaching out to the public and identified with them once more. 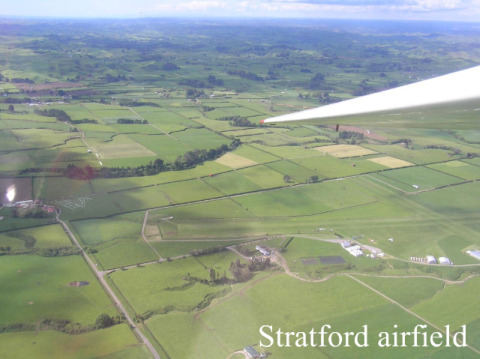