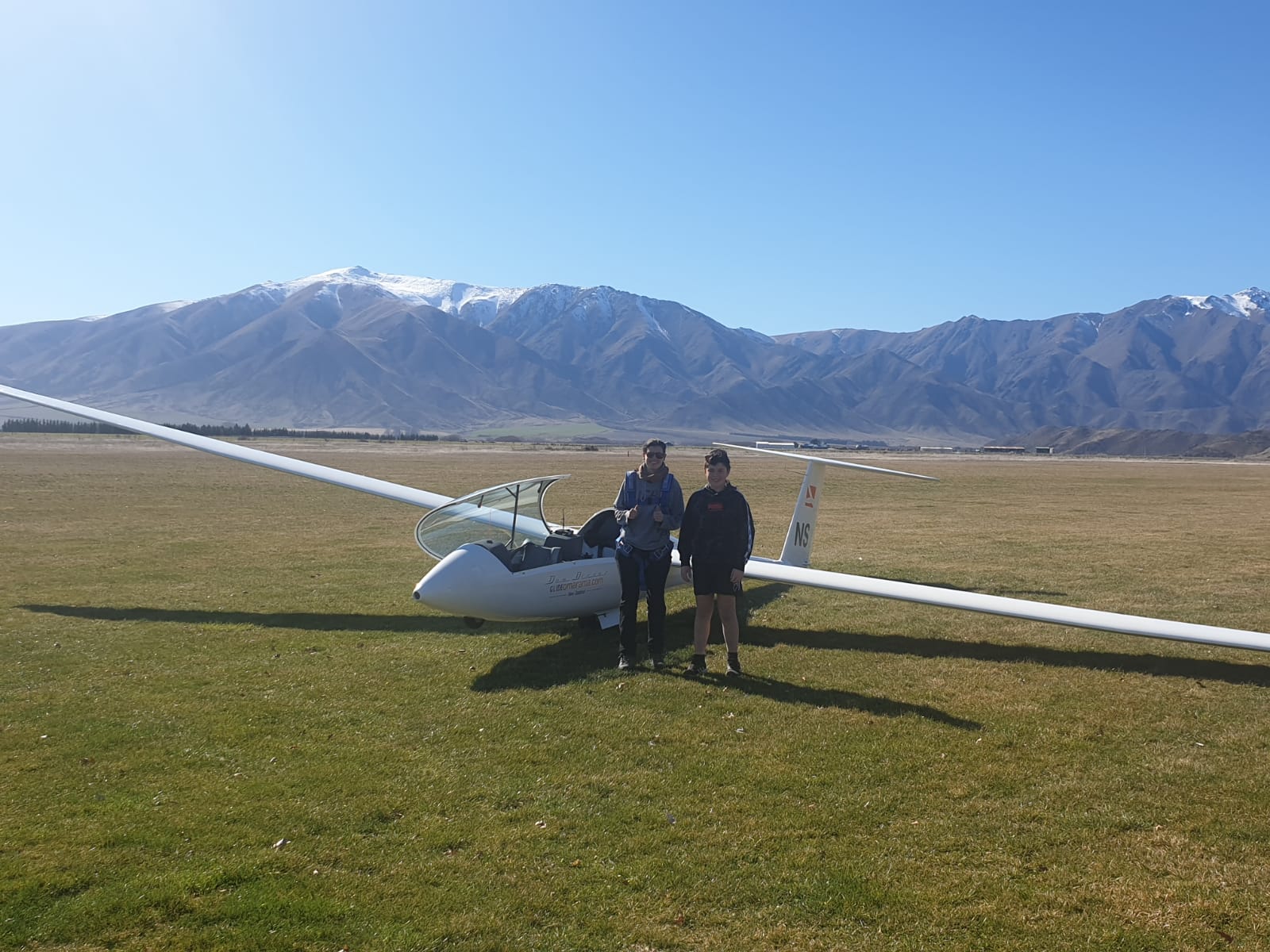 Dylan Miller with Sabrina Schells after his Trial Flight at Omarama on September 1st.  He enjoyed it immensely and wants to become a Junior Pilot and has already had his first lesson with Peter Williams at Stratford.  The pre-flight briefing given by Sabrina was first class.  And she'd made a Womens' Speed record over a 100km triangle a few days before-hand.  Their arrival back at the Omarama was an exuberant competition finish.  Dylan was delighted.

The Month That Was:

September 1st presented Flight Reviews for a number of pilots, a solo on TE for Dennis Green and a shared flight of 40min in NN for Les Sharp and Peter Cook.  Next  on the 15th came the biggie, a 200km flight in the Janus by Les Sharp and Peter Williams.   Essentially Stfd-Hwa-Npl Airport and return.   Best height in excess of 10,000ft.  Les's story follows.   A day for a couple of private owners on the 22nd with 90min for John Tullett in his K6 and 50min for Peter Williams in his.  Tim with John Spence were not to be out-done.   They managed 100min with the Janus.  Not all easy work though.   Just a couple of flights on the 28th.   Liam Finer with Peter Cook did an excursion out to Douglas and back to Midhirst using a conversion line.  The day then blue-ed out and Tim took Liam for a bit of cattle spotting on his Mangamingi farm.

On Looking for the Unexpected

On previous flights starting in wave around Mt Taranaki, I had ventured out towards the North and South coasts and the next step was to go towards both in the one flight.

On Sunday 15th September our Club Captain, Glyn Jackson  advises the Club of the forecast potential of a good convergence from the mountain extending to the East. I arrive at the field shortly after the allotted start time and Glyn is there, but there is little prospect of others flying that day as the majority of our members are out of Taranaki. We get the tug and Janus NN out and D.I. them. We discuss who would fly the glider and Glyn kindly offers to be the tow pilot. We then discuss the possibility that there might be some wave generated by the mountain as there were some clouds around it that indicate the possibility. As a club, we have not done many flights in similar conditions, but from the experience of others I know that if there was wave, it would be quite close to the lee side.

As I  prepared to get into the glider, Peter Williams arrives and I offer the back seat, which he wasn’t slow to accept. We launch okay, and after a circuit around the field to gain a height margin, Glyn tows us West under the convergence, which at that time was looking a bit broken, and not overly convincing. We encounter some consistent lift, so release at 3300’ and manage to climb under the cloud high enough to head west. We have a club SOP which advises not to cross the bushline at the National Park boundary below 4000’, but because of the conditions we opt to climb to about 5000’ then push towards the mountain to see if we could locate wave. The cloud shrouds the summit and extends outwards down the sides like an un-buttoned waistcoat, so I aim at the centre of the gap, about where you would expect the middle of the stomach. The vario points consistently down, so we back out of there and fly under one of the scrappy bits of cloud, which turns out to be rotor. At some point we find the right bit of rotor and Peter complains that his pressure vario is jammed on the top stop. Not a concern for me as the altimeter goes rapidly in the direction we all like to see. We lose that climb, but soon find another, then at 6000’ that lovely silky smoothness in which is still a very good climb. The wave band is very narrow, but we work it easily enough, and when we tap on the airspace ceiling at 9500’, turn and track south

With the wind behind us, it does not take long to get to where we could see Hawera Airfield between a couple of cloud streets.  We we make an advisory call, were asked in reply if we intend to land there. That is not our plan because we are still at 8000’. It is always an option if we can’t return north because of the cloud street between us and the mountain, and we are getting down below the tops. As we turn obvious gaps show in the shadows on the ground.  We pick one of the widest and track towards it. Now we have a headwind and the height loss is enough to deter us heading back over the National Park, so we head back to the west of Stratford township and finally find lift in the same area where we had released. 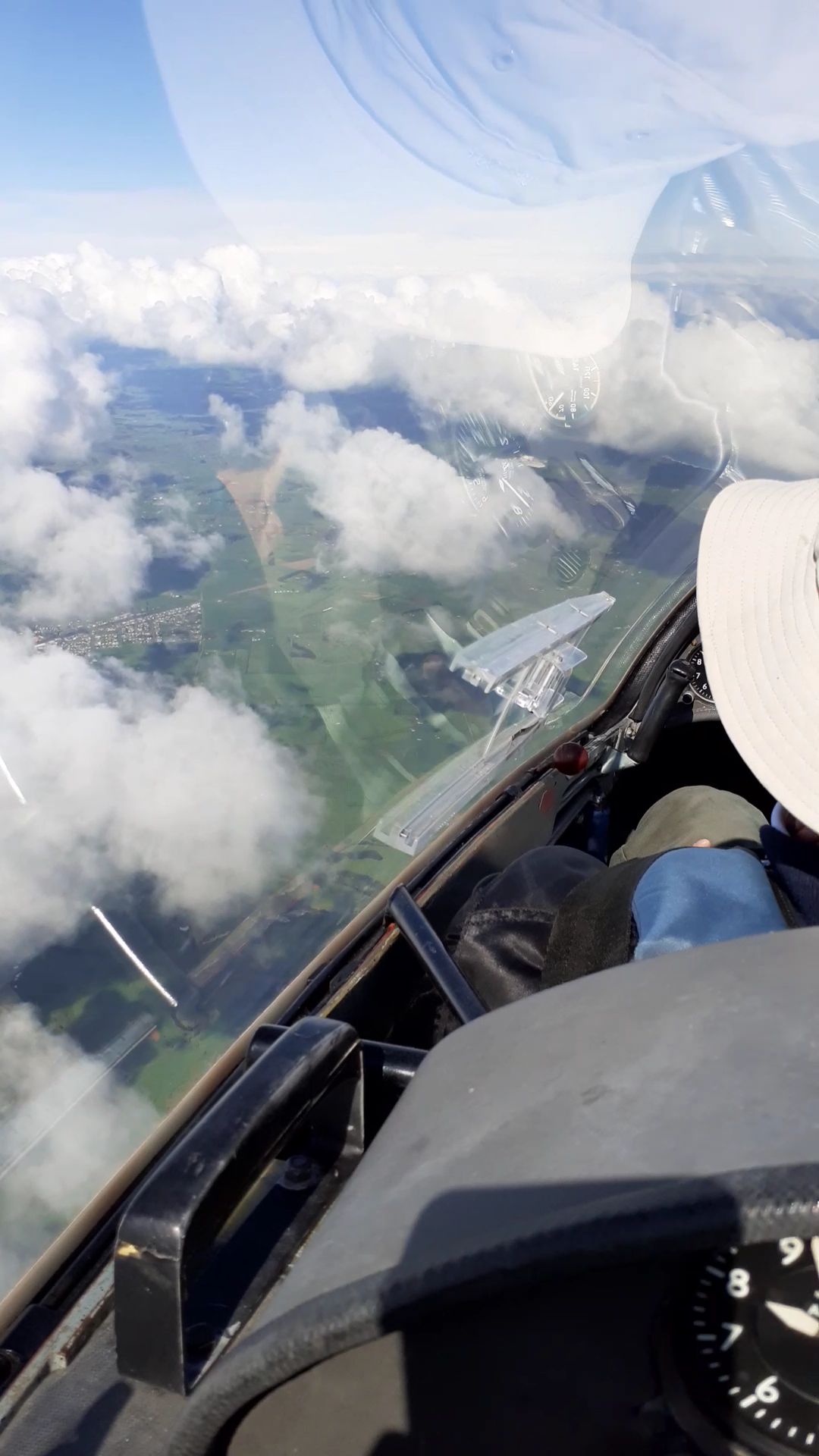 From there we repeat the climb back to cloudbase and head towards the mountain. This time we set out again into the blue looking for wave although I declare a minimum of 4500’. We reach it all too quickly and turn back towards the cloud but hit severe turbulence, nose down, only 40 knots on the ASI and is not increasing. You hear the saying “where there is sink there’s always” ….. Whumph and now I am trying to get the nose down, the airspeed  climbs through 70 knots, the varios are on the top stop and the altimeter is going up so fast that we quickly forget the escape plan. Again at around 6000’ we are in the wave, and Peter is happily videoing on his phone. As we climb towards 9000’ I call New Plymouth Tower and ask if we can get a clearance to fly over the city. Asked to hold where we are it is a problem to try and limit height, however, about a minute later, we are given the clearance as we go through 9500’ and are then cleared to track towards the port at up to 10,000’ which is great because we are almost there by the time I read back the clearance. The first couple of miles towards the city and we are still in the wave, so I use full negative flap to reduce the performance until we move out of the wave. We cruise out towards the western edge of New Plymouth until I feel that the height loss gets below comfort level (L/D to Stratford is still good), get a new clearance and headed along the coast towards the airport, then when we were close to overhead, we turn on track for Stratford. We say our farewell to the tower as we were leaving the CTA, call base to check in and Glyn suggests we try going east under the convergence. Peter takes over and we fly under the convergence at around 4000’ near the airfield and run along it in generally strong lift up to near the 4800’ base. Because of the risk of the convergence collapsing and leaving us with a long leg into a 20 knot headwind, we turned when the Oudie told us we were 10NM out and head back. We needn’t worry about any collapse as we fly at around 100 knots all the way back and have to use brake to get down into the circuit. Then again when downwind to get out of a 4 knot climb. It is always an irritation to have to get rid of height with brake, but 2 ½ hours was enough for cold feet and the bits in contact with the seat. 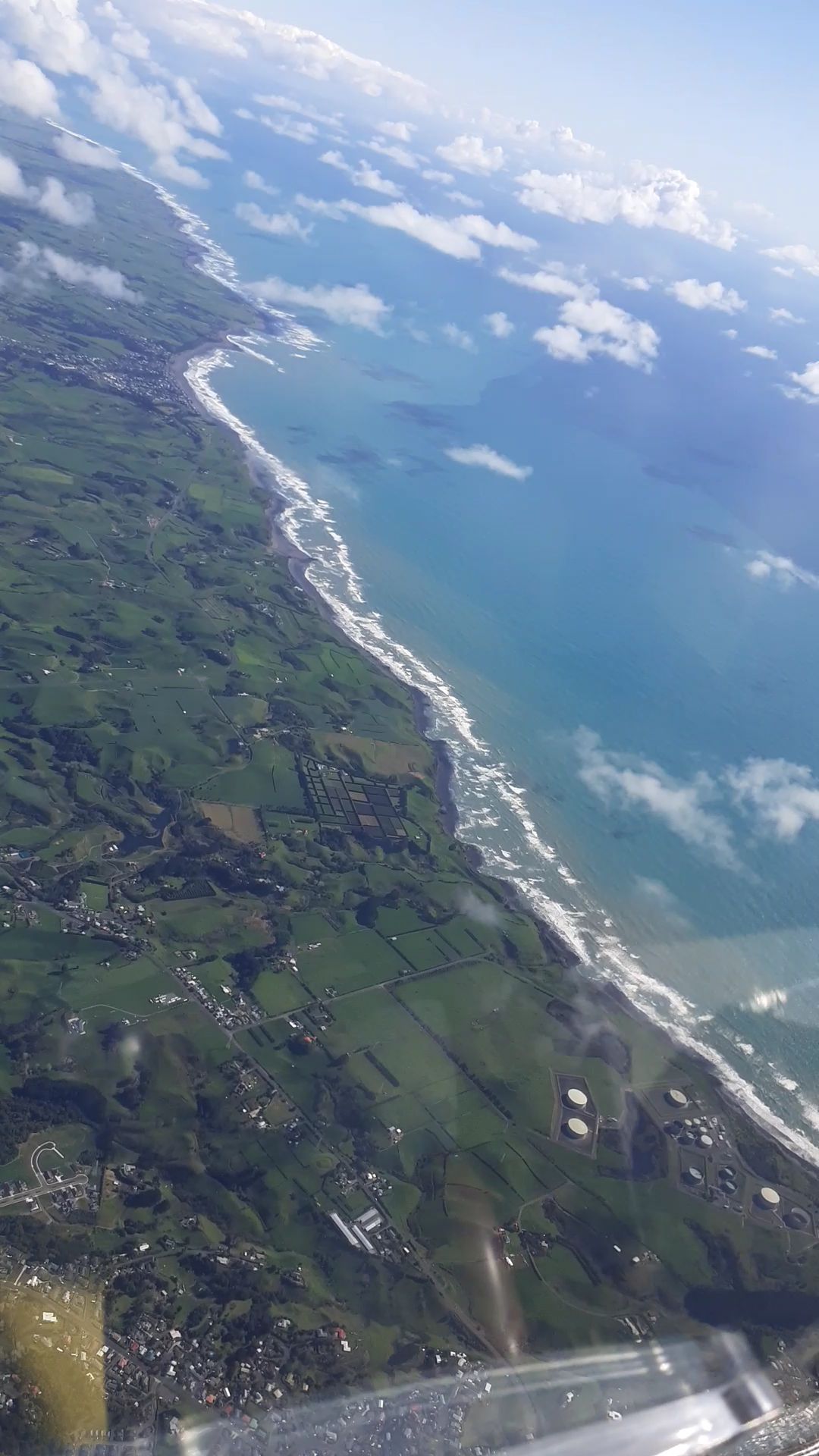 From my perspective, it is my best flight in Taranaki, and shows the value of exploring conditions that one hasn’t previously seen.

Thanks to Peter for his input to the flight, the photos and thanks to Glyn for opting to be tow pilot and his later enthusiasm in putting the logger track on the igc. file.

The newsletter published during the month stated the preceding weekend had not been of much use for gliding.  Bob Struthers is to fly in the Auckland Prrovincials with help from Clive Sherman, Geoff Croy and Peter Miller.  A whimsical hope expressed to return with a box full of trohies!  The 'Hamur' syndicate advise that they have purchased the Weihe ZK-GAE which will arrive shortly,  The last of the timber has been retrieved from the Fertiliser Works site and quantities of corrugated iron and six steel trusses are needed.  Cost will be about $1200.  The secretary Tony Smith is leaving soon for Auckland.  The oil (gas?) pipeline has been laid and tidying-up is needed before the strip is serviceable.

Only 4hrs 31m flying for the Blanik JB in the past month.  Thirteen of the flights were training flights.  Rangi de Abaffy has taken up fencing in ChCh.  No, not post and wire but with sword and foil.  Tony Timmermans told a club member at the NZGA AGM in Wellellington of a flight down from Auckland into the back of Stratford then a return to Drury.  The German Hill airfield currently quite wet.

Breaking news:  Rangi de Abaffy advised last night - 27th Oct. - that he'd made a big flight out of Springfield.  More details next month and a story too, I hope