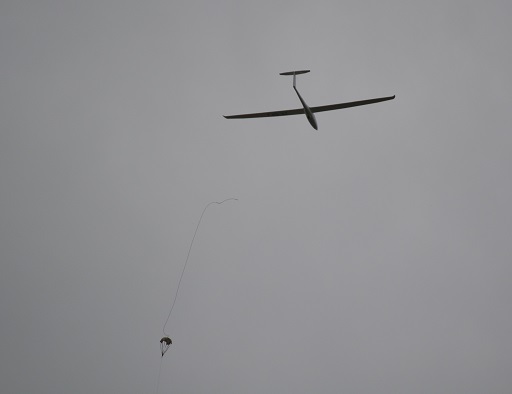 DG 1000 GPJ drops the rope at Papawai Airfield on Saturday.

At least the month has been consistent - no real flying happening.  Less than average at Omarama and a bit difficult at Matamata but a couple of rollicking ridge days.

I visited the Greytown Soaring Centre on Saturday on what was a grotty sort of morning and found members there operating with one of their DG 1000’s, making do with a brisk cross-wind and the runway lined with silage bales in lieu of the built-up area of Paraparaumu.  Things were going smoothly, a gusting tail-wind at the moment of launch well dealt with and heights of about 1800ft being obtained off the rope.  What impressed me was the electronic read-out in real time of the glider’s flight.  Catching the last flight on the web-site indicated that a grand tour of the area was had with the flight getting to or past Alfredton.  Obviously the wave had been contacted or by then Mark Wilson had had more practice.  Or both.

Les Sharp took matters into his own hands and went off to Tasmania to check out things gliding. ( He and Sue probably did some sight-seeing too!)   Had a flight and here is his story –

Prior to going to Tasmania I had been in communication with Lumpy Patterson, who had seriously considered purchasing our Pawnee RWS when it was for sale.

I had hoped to possibly meet him, but he was at Narromine NSW for a gliding contest during the time we had available.

Sue and I were in Launceston having completed the APT tour on 19th November. I had been in touch with the club and they had advised that their main flying day was generally Sunday. I had contacted the duty instructor, John Spilsbury, to establish that flying was likely, so we hired a car (there was an Avis desk in the hotel lobby), and headed South. The club is around 4km east of the main highway about half way from Launceston to Hobart. The airfield is on farmland and access from the public road is about 1km via a rutted farm road. When we arrived they were having their AGM, so there was time for a casual cup of tea and to have a look around then eat our lunch before they started operating. Their fleet is a Twin Astir (minus U/C doors-like ours), a Grob 103 twin self launcher that isn’t currently operational, a Club Libelle and a K13 that was also unavailable. Launching is a 160hp Pawnee. The situation is at the southern end of a wide valley, and they have two runways, the main one vector 11/29 is about 800metres useable and that was the one in use.

I went with John for the second flight of the afternoon and we towed to 2000’ agl releasing over the edge of the hills visible over the glider in the attached photo. It seemed easy enough to find thermals, but each time that I got to around 2000’ agl they seemed to suddenly stop working and a search wouldn’t find anything. It was almost like a switch had been turned off, so it was a case of finding another likely trigger and start again. After a bit, this act was getting repeated at a lower level closer to the field until there was no option but to enter the circuit and land after 31 minutes.

Apart from offering pointers on where to try for lift, John didn’t do anything else and seemed to have enjoyed the ride.

They had flown on the Saturday and apparently were getting good lift up to 5000’ agl. It had been the better looking day in Launceston, but our tour hadn’t finished until mid-day and it wasn’t practical to have tried to get there, and I wasn’t aware that they were going to be operating.

All of the members we met were friendly and showed some interest in our operation. 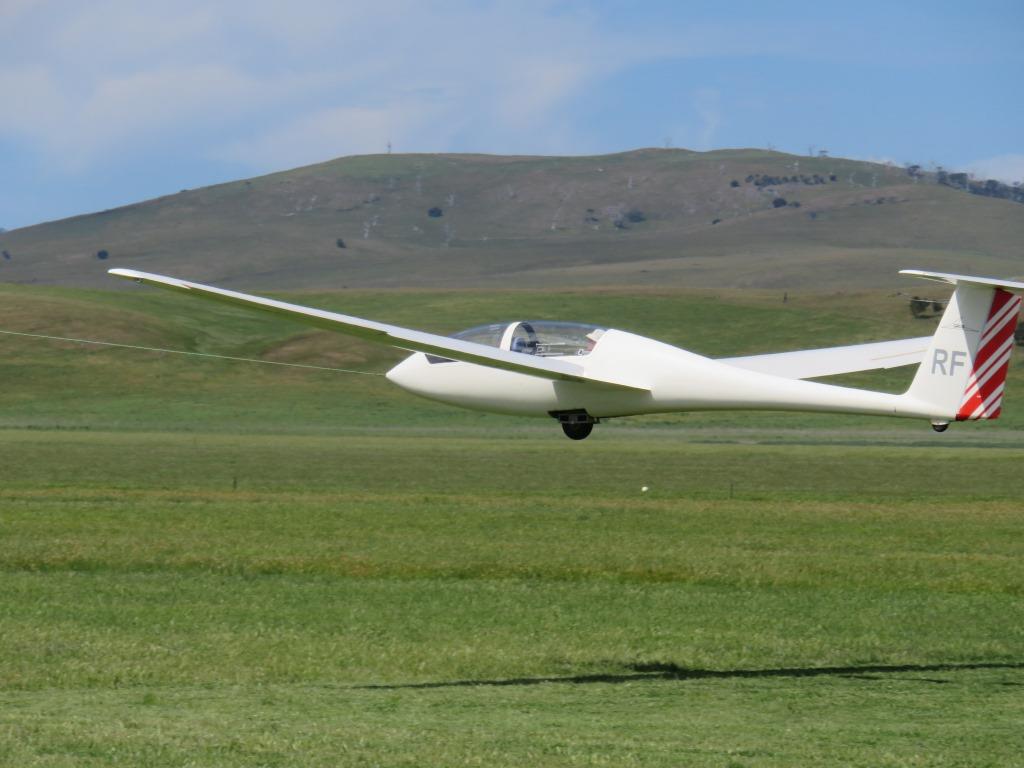 Let's hope for better weather in December - though its anybody's odds!