Below is a picture taken by Trevor Terry of Taupo GC during the recent Central Plateau Competitions where Peter Cook performed most creditably.  He is a man of few words (written) that is but he did  tell me how things went.  He came fourth in the competition.  Tim Hardwick-Smith has sent in his story of his flight out into the back-country.  Published with relish. 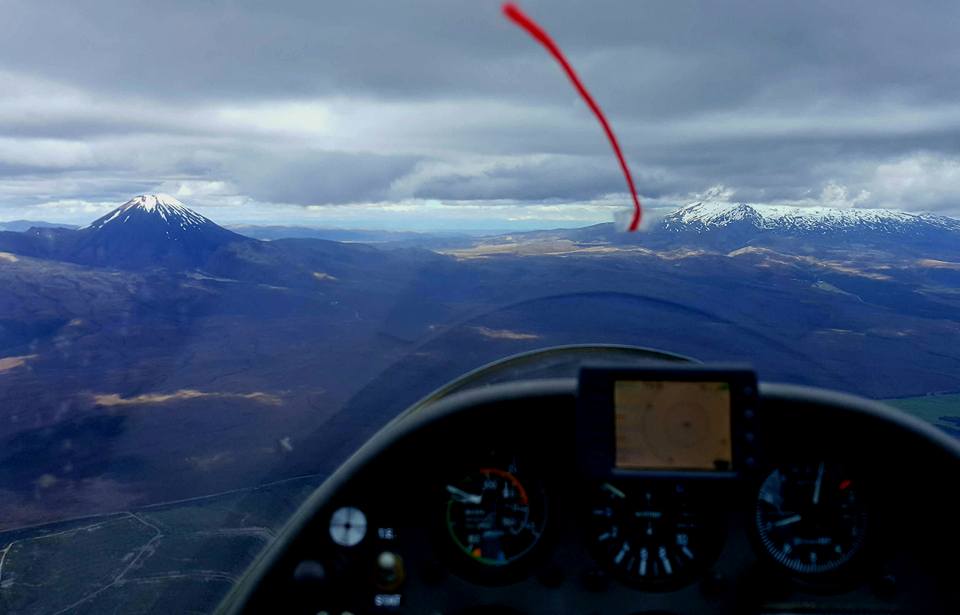 Working on the well proven concept that Mondays are the best gliding days because everyone has gone back to work, a disparate group ran counter to that and held a flying day for Monday.  The result was three flights over two hours (one was nearly four and a half) and the fourth was a bit over an hour thirty.

The forecast for the weekend was terrible but Monday was so good it was hardly believable so we thought we had better see what it was like for ourselves. It was cold Sunday night and no radiation fog in our valley – good signs for a high cloud base.

Four of us managed to get a day off plus one retired tow pilot. I was first off at midday with a short $20 tow to 1000 ft. Wasn’t quite as good as I thought it would be while on tow but eventually managed to climb away.

I had a 300 km task Stratford, Taumaranui, Kakatahi (Parapara road), Stratford programmed in the Oudie just in case. Having checked with Will that Te Wera was useable  I had also cleared the sheep off my strip.  This gave us a huge safe area to fly depending on the cloud base. The RASP map had predicted about 9000ft cloud base so I was also prepared to get clearance to go above 6500 ft. As it turned out cloud base was only slightly higher than 6500ft so it wasn’t worth getting the clearance but I did have to pull the brakes a couple of times.

I started heading east with thermals getting stronger and higher. Got as far as Whangamomona and there was a blue hole to the northeast as far as Tangarakau and then a lower cloud base towards Taumarunui. My high cloud base did extend east towards the mountains with the 7500 ft peak of Ngauruhoe almost showing under the clouds but I wasn’t feeling brave enough for that. When I got home I worked out that this would have been possible to have safe glide to Marco strip just east of Whangamomona and also Ratahi if 6500’ feet was maintained at the halfway point.

Spent a fair bit of time flying over steep bush covered hills with razor-back ridges and narrow gullies. If you lose height here plan A is to glide out to a known airstrip. There is no plan B so a very healthy margin of 2 or 3 thousand feet was maintained for plan A.

Clouds were looking good to the south so headed south over the Mataemataeongas switching the “direct to” on the Oudie from Te Wera to my strip. An interesting looking sea breeze was forming up to the South but when I got to the Patea dam it wasn’t quite so good – a bit raggedy looking and running all the way back to Stratford.  Cold sea air was being sucked up the Patea river valley making waves on Lake Rotorangi. Another option at this point could have been to head south east towards Wanganui but would have had to stay well inland to avoid the sea air.

Now looking good where I had come from so back over the Matae’s to Whangamomona.  Nothing had changed here but getting used to flying over the trees. Back to Stratford. 6000ft over Te Wera gives you final glide to Stratford but ended up meeting the sea breeze front at Toko, climbing up the front, following it to Stratford then going through it to weak thermals in the sea breeze and making my way round to the Pouakai Saddle. 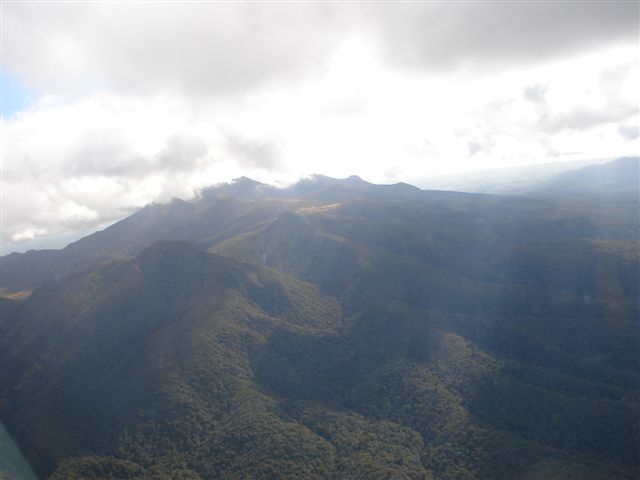 Above:  Off the North-Western end of the Pouakai range.

Above:  Passing by the Nth Egmont Visitor Centre.

Back out to Norfolk Road, and then along the northern sea breeze front which had formed up.   It meant running out past Lake Ratapiko along the edge of the 2500ft airspace.  Should have done another run up and down this as Peter Cook just beat me on OLC points over at Taupo (go Peter – he’s doing really well). Easy fast glide back to Stratford for my feet to thaw out. Temperature at 6000 ft was 0C.  Four hours thirty minutes and 274 OLC points. Peter got 288.

Tim mentioned Peter Cook who was busy flying the Central Plateau competition.  He did rather well really placing third on most days but missed the shift to Matamata for the ridge thrash.  He and Helen were in Napier midst the art-deco architecture but also quite aware of the massive convergence lines to be seen.  Cloud-streets, not city streets.  He’d covered nearly 700km over the three competition days, though on one day it was a bit of Tiki-touring just because he enjoyed the view.  Glyn Jackson is taking his Ventus down to the SI Regionals at Omarama during mid-November and Peter is mumbling something about to going to Ypuk this season for the competitions there.  Tim’s flight would be the best flight in Taranaki for quite some time.

There was no flying at Stratford this weekend  (5th & 6th)  and the copming one looks a bit doubtful too.