January 6th:  An interesting day to start the New Year.  Clinton Steele out over the Norfolk A/F.  Whether it was the siren song of Norfolk or more prosaicly, he ran out of lift and had to land-out there.  A relight and notched up an hour fifty before returning unhindered to Stratford.  Nearly an hour for John Carter then John Tullett took David Catt X/C.  Good experience for him.  Les Sharp on towing duties.

January 9th:  One T/F to start the day, a check flight for Dennis Green and Dylan Miller back for more instruction.  John Tullett was backseat this day and Tim Hardwick-Smith towing.

January 14th:  Clinton plummeted into Norfolk again, had a relight and back to Stratford.  An instructional flight for Julie Langford, local fights for Dennis Green in TE whilst Peter Cook attended to a T/F.  John Tullett showed how it was done with nearly an hour thirty in his K6e. Tim on towing duties.

January 16th:   A good day for the P/O brigade with flights of more than an hour and Dennis too in the PW5.  New member Trent Lochhead given a good flight by Peter Cook.  A shake-down flight then an hour forty five minute flight for Tim Hardwick-Smith in his Discus.  Jim Finer towing.

January 23rd:    Dennis started the day off with an hour in TE, John Tullett attended to a T/F. Another X/C for David Catt with Les Sharp backseat.  John Carter had more than two hours in his ASW15 - a good set of wings that.  And to finish off the day, an hour thirty for Les Sharp in his ASW20.  A good high tow and he used some wave to get to 7000ft.

January 29th:  John Tullett attended to a T/F. John Carter notched up another hour whilst Les Sharp began the day's instruction list with Julie Langford then with Davd Catt followed by Caleb Finer.  A check flight for Ross Perry - ex Manawatu.  A local fight for Dennis.  One tow by Les then the rest by Jim Finer.

January 31st:  Still some value in the month with X/C fights for Dylan Miller, Keith Finer and David Catt, all with John Tullett and all on his own,there was one for Dennis Green.  Les Sharp towing everone into the right spots, it seems.

Les Sharp helps this newsletter enormously with copy and they're great value.

Notes on a flying day:

January 16th.  While the RASP and Skysight forecasts had promised better, the day was another challenging one.

I launched just before 1300 hours and took a  tow to 3000’, releasing East of Midhurst and flew under the nearest likely looking clouds and didn’t feel any excitement with what I found. I headed East to some slightly better looking clouds and got a climb to about 3400’. From there I tried going further East and got to about two miles North of Toko, but the bases were lower, the lift seemed weaker and smoke haze was obscuring the clouds. The wind was about 10 knots from the North and while I had thought of risking going further out, the prospect of landing out without getting much further caused me to turn around while I could still get back. I headed West via available clouds and got back to 3000’ as I flew above Beaconsfield Rd towards Midhurst where I managed a climb to about 3500’. There was a line of clouds roughly in line with SH3 and I headed along that towards Norfolk Rd. About a mile South of Norfolk I headed towards the mountain but about half way to the bushline the lift became too weak to get back to cloud-base so I headed towards Midhurst with the Oudie telling me I needed 46:1 LD to get back to Stratford, its not reassuring when the vario is spending more time pointing down than up. About a mile North of Midhurst I finally got a good climb and was joined by GNN and GKB. At about 3400’ I tried tracking East again and ended up just South of Toko. I got several climbs in the vicinity while I headed North into the wind. There was a fire up towards Lake Ratapiko and the smoke was rising to about 500’ then curled over and spread out near the ground. By then, the clouds were shrinking and although I tried to get to the North end of Stratford township where GTE was climbing happily, I was down to circuit height so regrettably, had to put the wheel down and fly a low circuit in almost continuous lift until selecting landing flap on finals, landing after 1 hour 49 minutes without having got above 3500’.

Yes, it was rugged once we got over the national park. I did contact the wave, although I hadn’t turned my oxygen bottle on (realised on tow and almost went back early for a re-light) so gave it away after getting to about 7000’. The wave was off the mountain to the North-East and very confined, but I did see up to 5 knots lift. After that I headed south over the park experiencing lift and sink that was putting the varios off the scale. I then tracked along the south side of the convergence where there was patches of lift along the front edge. Once I had got down to cloudbase I went under it and found enough lift to go out to Tim’s strip at Mangamingi, used that as a turnpoint as the cloud was looking much thinner ahead. Returned to Stratford, did a run out in the blue to the north to lose height, came back to overhead the field at around 90 knots and still had to use airbrake to get down.

The flight with Dave Catt was set-up for the possibility of finding the wave, but ended as a lesson in flying a less than classic convergence. Again it required full airbrake to overcome about 6 knots lift to get from 2500’ overhead down to the circuit and there was so much lift around the circuit that I ended up doing “S” turns on finals with full airbrake to get down without using too much runway. 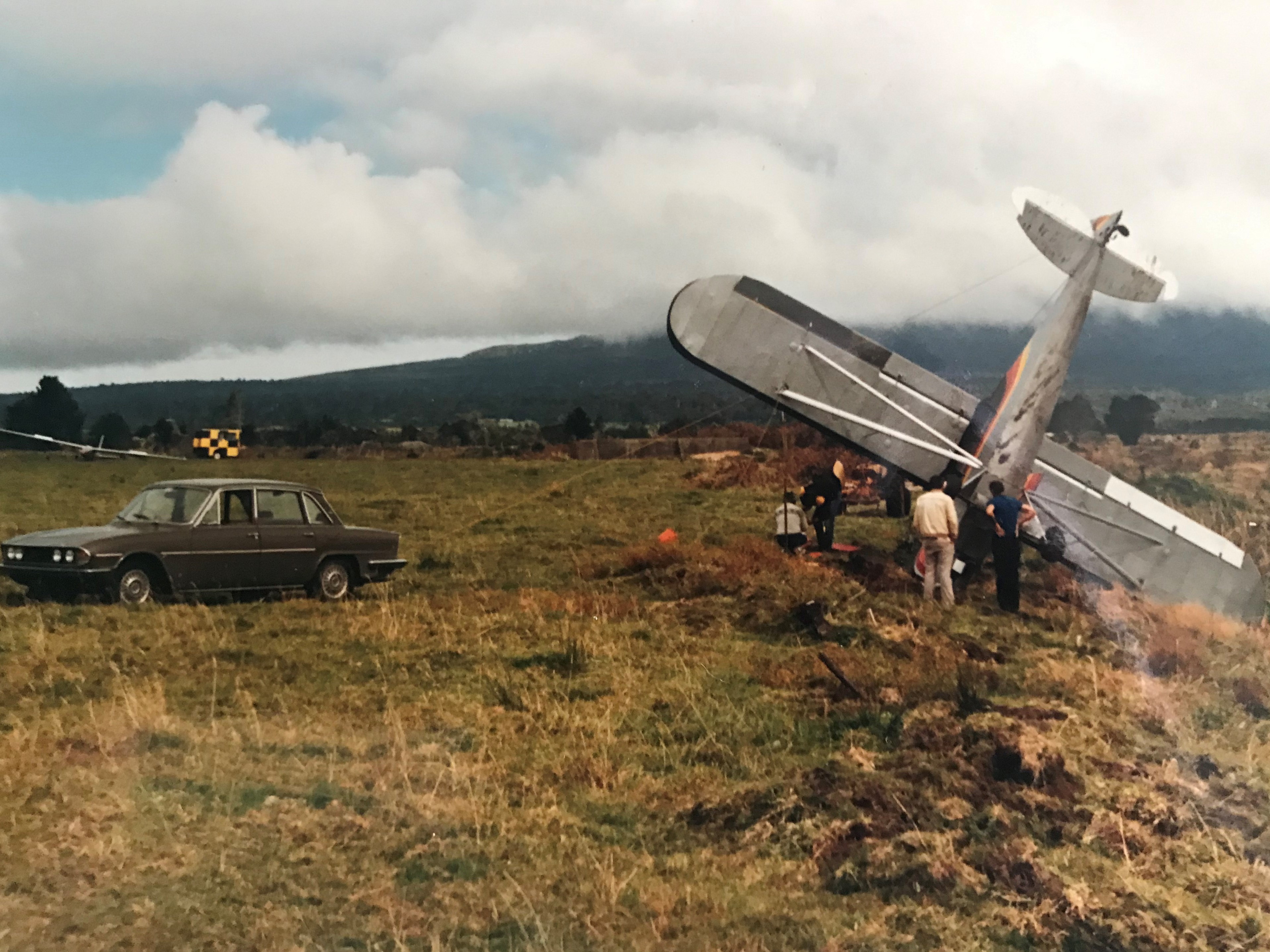 Gather around, each and everyone, a picture of what happened to our just purchased towplane.  Apparently, a wheel brake that should have worked,  didn't, the aircraft slewed to starboard and nosed over.  Fortunately the prop had stopped turning so  damage to the crank shaft was avoided.  Undaunted, the club repaired the aircraft and carried on.  I think this was during 1988.

Enjoy the new year.  Its been busy so far.