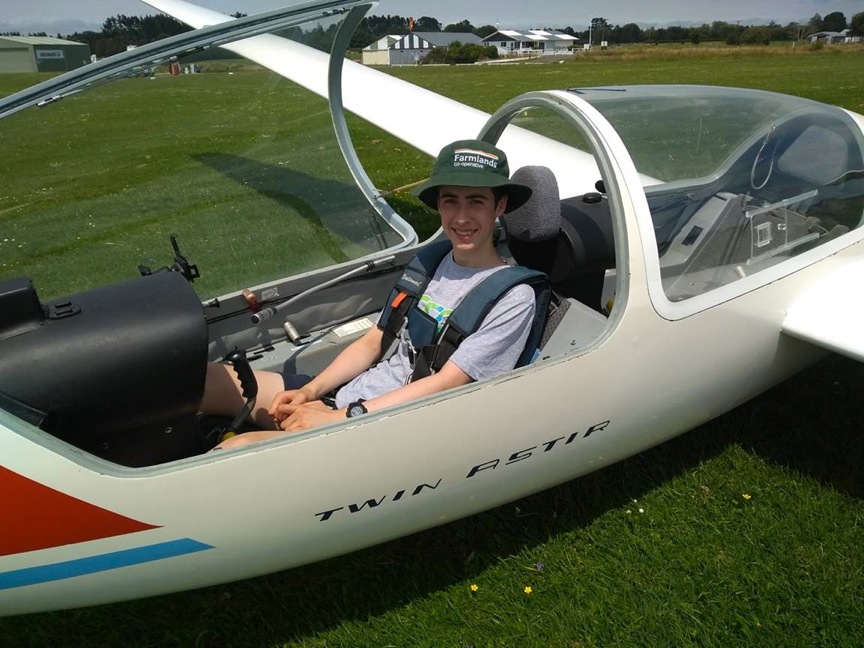 January began early - on the second day of the New Year.  Pleasing to welcome John Carter who began with a flight with Clinton Steele.  Then, from the land of the free - Gene Campbell who did the hour with John Tullett.  Not the least flight for the day was a first solo for young Liam Finer. The second Youth Glide member to do so.  To show it wasn't a fluke he made two more solo flights.  Well done Liam!!  (see the lead photo).  More flying on the 11th January.  Les Sharp sallied south and found he needed to land at Hawera and required an aerotow retrieve.  Julie Langford, another welcome addition to the training ranks had a couple of flights with Peter Cook as did Jim Finer, not to be outdone by younger members of the Finer clan, also made a good 34m flight. Tim Hardwick-Smith, recovered now from the effects of an inadvertent barrel roll in his Farm Mule, resumed his partnership with John Spence in flights long with a 55m flight.  18th January a day for the trainees.  Two flights with John Tullett for Julie Langford and one for John Tullett.  Dylan Miller strapped a Go-Pro camera to his head for a flight with Peter Cook.  Flights of nearly 40m for Dennis Green and Clinton Steele.  On January 21st, Liam Finer had a couple of flights with John Tullett then did a solo.  46m for Dennis Green, just over two hours for Glyn Jackson while nearly two hours for Clinton.  An hour and twenty minutes for Dennis Green and John Spence in the Twin.  An English couple - Trev and Bev Chimes of the Yorkshire Gliding  Club were treated to flights in the Janus. Winding up the month was the 28th.  James Hastie with Dennis Green in the Twin followed by couple of training flights each for Julie Langford and John Carter,  all with John Tullett.  The Green / Spence duo flourished yet again with 66m in WZ.  And that was it.

50 Years Back:  Death of Clarrie Parker.  He was a President and instructor for our club.  I've been forever grateful to him for sorting out my troubles with aero-towing.  Hr took part in the Pacific campaign, flying Ventura light bombers.  Had to ditch his aircraft.  All his crew were safe - He'd been very particular in insisting on the proper drill necessary.
The airfield opened by the Hon. David Thompson on Feb. 5th.  Pilots from Piako and Wanganui in attendance.  Wave flights for Bob Struthers in our Olympia and Tom Wilson with Jim Cash in the Wanganui Bocian.  Gordon Parker organised anyone still standing, into setting up the club house wall frames.
25 Years Back:
First solos for Peter Cook at our Piako Camp and Max Benton at German Hill.  A good result from Christmas voucher sale - $3700.  Back at Matamata some good flying done with several x/c flights.  Some members involved with the World Champs at Omarama.
Papa Mike.

But not to forget a big thankyou to Dougal Wickham who has sorted out the website layout after it went AWOL on me.