When I arrived at 11am there was a 20kt northerly with a convergence line sitting to the south. It was interesting to watch as the convergence line shifted north the wind reduced and became fairly calm as the line sat directly overhead. As the line shifted further north the wind swung 180 degrees and we ended up with a strong southerly. Even when it was calm on the ground the clouds above were moving pretty quickly and all seemed to be heading in different directions! We had a pretty smooth take off and climb considering what the clouds were doing. It didn't take long to get up to about 8,500ft and take a close look at the wave system. There were several lines of cloud running at right angles to the wind direction in the lea of the mountain - it looked fairly complicated but some areas were really classic lenticular shape. Overall it reminded me a lot of what you see whitewater kayaking with the flow of water over rocks setting up wave trains. We flew into the wind and went from big areas showing about +500ft/min upwind of the cloud to -500ft/min in the blue downwind of the cloud, all nose level and very smooth. The lenticular clouds look surprisingly flat considering the strength of the lift/sink involved. Glyn demonstrated a technique for figuring out the wind speed and direction - turn into the wind and pick 2 points on the ground directly ahead, if they stay in line you have the heading. Then pick 2 points in line on the ground at 90 degrees to your heading and adjust your airspeed until the points stay in line. It worked out about 45kts WSW at 8,500ft (creeping forward a little at 50kts). The amount of cloud cover increased noticeably in the time we were up - the blue gaps between the lenticulars filling in. The descent was a bit bumpier than the climb but still not as bad as I was expecting.

I managed to get some info from Glyn. From what he has given me it sounds like German Hill on a quiet day.

Tim was not excited about the weather, so all the gliders stayed in the hangar. One of the reasons for the TGC flight was to see how turbulent it was in the circuit (not smooth but OK), and then once clear of the circuit if it was possible to enter the wave system from the side, thus avoiding the roughest air (and yes,this too was possible). Not a day for low hour (or un-current) pilots, wind on the ground at Stratford was variable, strong at times, but still at other times and swapped directions a several times while we were at the airfield, requiring some thinking about aircraft ground handling.

So, a useful trip for the lads. The next task will be to hook a glider on and sally forth. The club has all the gear for wave flying, except electrically heated socks I guess.

A couple of photos from Dougal: 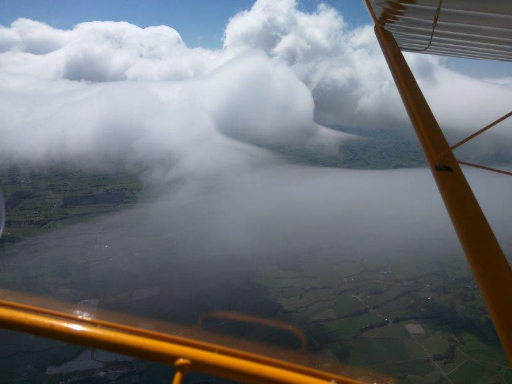