Here we are, near the end of the gliding season and some good soaring for anyone who wanted to go for it. Tim Gordon, of the Whangarei Gliding Club and in Taranaki temporarily had a check flight with Tim and then took his friend Laura for a flight in WZ. Peter Williams attended to a trial flighter whilst John Tullett had done so for the first flight of the day.

Sam Tullett took TE away for 40min and invited others to avail themselves of the lift he had left behind. Singularly generous of you Sam. There followed flights for both of the Disci (I took Latin as well, Tim), two hours for YT and two and a half hour for XC. Plaintive calls for a launch came from the ASW15 duo at Norfolk and Glyn flew to their rescue enabling Kevin Koch and Clinton Steele to join the happy throng – if you could call two gliders a throng. Much appreciated are the accounts from Kevin,Tim and Glyn of how their days went.

Firstly thanks for to the club for coming over to tow us, it is greatly appreciated.

It was nice to see the “big yellow” coming down the runway, the colour is most impressive. We were a little concerned however regarding the length of the grass (it would have been at least 200mm long), not a problem for the tow plane on its own but perhaps a different story when towing a glider.

GKB was first up and sure enough the grass proved a problem with it slowing the tow and almost immediately it was like experiencing an ASW15 with an offset belly hook all over again. GKB had a mind of its own and started heading off to the right toward the fence and then following full rudder, headed way off to the left. Both times well outside the line of the tow plane and when we headed back to the fence again I decided it was time to abort and finished up sliding down the runway sideways. Neither glider or tow plane had made it off the ground. No damage was done other than to the pilot’s pants and after a quick tow behind Clintons Ute back to the clubroom end of the airfield, Glyn the tow pilot, who was already there and waiting, said he was keen to have another go. So we shook our pants, took a deep breath and radioed all out and we were off. This time we kept the stick right back and the tail on the ground so we stayed straight and all went well.

The rest of the flight was relatively uneventful, scratching out some lift over the Croydon road area. A trip up toward the mountain found some heavy sink as did most of the other areas toward the north. Saw Tim cruising around sometimes above and sometimes below and with Clinton in GGN floating about as well it was a pleasant way to pass an hour. Landing in the grass was nowhere near as eventful as taking off so all in all the afternoon ended up well worth the effort.

Now Tim has his turn:

I was rostered to fly the tow plane so was looking forward to a day in Eurofox TGC. Did one tow before Tim Gordon from up north needed a check flight so Glyn did that tow, and the next towing Sam in the PW5

Back on the ground, Glyn was looking very possessive of the tow plane and Sam arrived back and said he had left some lift up there for anyone else who wanted it. 4 instructors, John T, Peter’s C and W and myself was a bit overkill for one two seat glider so I took the opportunity to go for another last flight of the season in the Discus. Peter C thought the same.

Glyn towed Peter and me in our Discii (I did Latin in form 2 and 3) and went over to Norfolk and towed Clinton and Kevin in their 15’s. We were all in the same thermal over York road Quarry at one stage which was fun. I also sat on Peter’s tail for a few minutes to reassure myself that my fat Discus wasn’t at too much of a disadvantage – not at thermalling speed anyway.

The air was quite unstable with the temperature at 3000ft, 5 degrees, even though the pressure was very high at 1031MPa. I see from the flight trace that I averaged 1 knot climbs and the highest cloud base was about 3500ft. Since there was only 2 or 3 knots of wind the thermals usually had a definite source such as a ploughed field, patch of bush, York Road quarry. It was really a matter of flying from one thermal to the next and staying within glide of Stratford without trying to go anywhere.

It was also a chance to get to know my new vario – the old one was 27 years old and had forgotten where zero was. This new one tells you when you are going up and down and also what every other instrument in the glider is saying plus a few other things like which way up you are. It does seem to give very good wind measurements – better than the Oudie so I am going to have to get the Oudie to listen to it to give more accurate final glides.

Two and half hours. I managed to accumulate 94 OLC points and a full bladder (it was cold). I see Sam and I are the only glider pilots in NZ to log a flight on the OLC site that day.

Now for Glyn’s idea of how the day went:

TGC is performing exactly as the Eurofox factory promised, and as anticipated the preliminary data indicates that she will out-tow a Cub. Her amazing decent rate takes some getting used to, and we can expect that she may give some of the bigger tugs a run for their money in ground to ground towing times.

Total fuel consumption (or lack there off) for the day (9 tows and two ferry flights) was 30 litres, which works out to be 1.5 litres per 1000ft of tow. 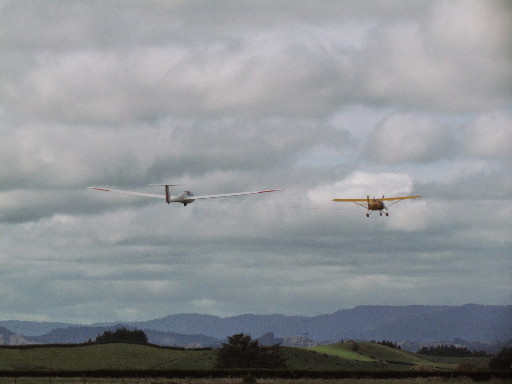 The weather gods appear to be granting us another flying day for Saturday the 9th so that is a good thing.