Thursday 26 Feb looked like it should be a good day. The previous two days had been a bit too good with instability extending well above cloud base making the clouds tall and overdeveloped with a few showers. For Thursday the tephigram showed the instability was still there but a light northerly was forecast along with high cloud coming in preceding the tropical depression which hit over the weekend. The northerly and the high cloud should tone down the over development – if they didn’t kill the thermals altogether.

The task was to start overhead Stratford airfield and head north east to the first turn point where York road meets the bush line. From there east to Whangamomona for the 51km leg (the extra kilometre is to allow for the 500m radius beer can turn points) and then back to Stratford airfield. Since the whole task was a little more than 100km and I was going to land where I took off, using the 1% rule I could take a maximum .

Ralph Gibson towed me to cloud base 2500ft above the airfield a little to the east. After sampling a good thermal near Toko I crossed the start line and tried to get to the first turn point by using thermals and avoid the big mountain convergence that had set up to the south - the idea being that the convergence draws all the warm air from a big area making it hard to get away from. Anyway the thermals weren’t working and I had to retreat to the power station thermal which gave me a 1600ft 3knot climb. (We’re lucky to have that) This got me into the convergence which gave me an easy run into and out of the first turn point. After 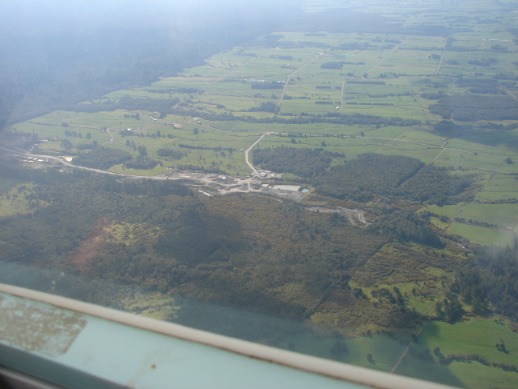