Some good flying this month. 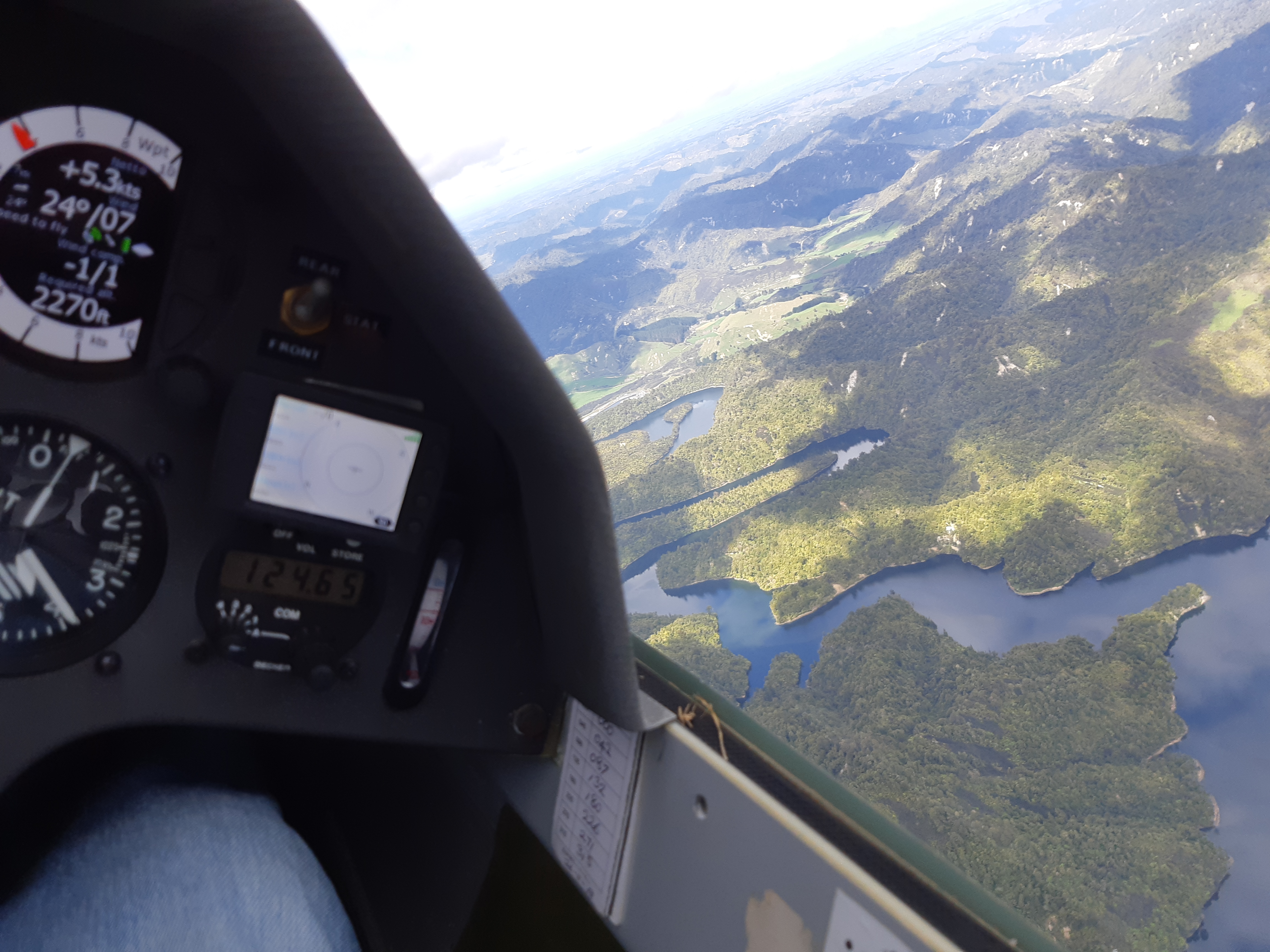 The Discus XC over the Patea Dam.

It started on Thursday when the first rasp map appeared for Saturday which looked good so I rang Jim to see if he could tow. I had done a few weekends of either flying the towplane or instructing – it was time to fly the Discus. The rasp was suggesting 5 knot + thermals to about 7000ft and typically as it turned out it was 2-5 knots to 4-5000 ft which is still OK for Taranaki.

On Saturday morning I cleared the sheep off my airstrip which opens up a big area of Taranaki for safe gliding depending on the cloud base. It helps that this strip is only 500 ft asl.

I was first to launch at about 11.30am thanks Glyn. Jim arrived later and towed Glyn in his glider. The thermals were only just starting so hung around the airfield a bit before setting off for Lake Rotokere where there was a good thermal out in front of the southern sea breeze front. Followed more of these down to the Patea dam (I have done this before). From there it looked a bit mixed up to the south so decided to head north to Whangamomona. There have always been good high thermals through here and even though it is over rough country and bush it is an easy glide back to my strip. Arrived over the Whanga’ saddle to find a big blue hole to the east. So glided out to Whanga’ to claim the turnpoint and back to the Whanga’ and Pohokura saddle area where I dithered a bit working up the courage to go somewhere else. There is an airstrip on the top of the Pohokura Saddle which was only sparsely stocked with sheep. After one false start I followed what must have been the sea breeze front heading north east – the sea was surprisingly close. So flying over some of the narliest country I have seen in Taranaki, papa hills with razerback ridges and deep gullies and faces so steep in some places there wasn’t even any bush on them. Was able to look out towards the sea at Lou Newtons farm strip up the Uruti valley. As I turned around I looked down at a good strip at the end of the Moki road so I had nearly made it to Mount Damper. Looking north I think I could see flat bottomed clouds into the Waikato but a lot of bush too. Another day for that – I had had enough excitement today.

A good run back past the Purangi airstrip then Huriroa and met Glyn and Peter C at Douglas. The thermals here weren’t very good so headed south towards a better area in front of the southern sea breeze front but it did mean committing to landing at my strip if it didn’t work. Glyn followed. Followed the front from Mangmingi to the mountain and then around to the Puakai Saddle. Then up and down the sea breeze front a couple of times with Glyn– it was pushing against a light northerly and running out of steam, before landing back at Stratford.

4 hours 40 minutes and 288 OLC points the most I have done in the ‘naki. Others had good flights, Peter W flew his K6 out to Lake Rotokere, John T got onto the mountain in the Janus and Glyn and Peter C and Dennis did good local flights with Glyn getting a few more OLC points (149) by flying up and down the sea breeze front.

This day turned out to be a rather good one with some good flights posted on the OLC list.

For the day - sixteen hours and thirty-nine minutes in seven flights.

Now one by John Spence for the 14th of October :-

Sunday 14 October was predicted to be ‘boomer’ with a high cloud base, well, it was partly proven correct.

Following the DI on Janus NN, a spare instructor was found to occupy the rear seat on my quest to stay airborne.  John T happily offered to be my extra ballast and we blasted off behind Jim F in TGC and located lift and with vario screaming we abandoned the tow at around 1,500 ft AGL.

The next two hours or so was a battle of experiencing 5-6 knot thermals and even stronger sink when changing locations. The upper wind was quite a stiff southerly and even though we had a great L/D we tended to drift quite rapidly north then make a hasty beat ( 80-90 Kts) upwind losing 800-900 ft in the process. Cloud base locally was initially 3,200 AGL but slowly dropped.

John Spence. (Rather modest is our John (Ed.)

Had a ripper in NN with Will. Low base ok lift and speedy flaps. He facebooked some of it and Glyn got a file but I can't open it.

Flights for Liam Finer with Tim one for Will Hopkirk in TE , as did Nathan Whittleston.    Glyn Jackson off somewhere with the Ventus V V .   And a trial flight for Nathan's Gandfather to round the day off.

Nathan began the 21st well with nearly 50m in TE.  jim Finer took Dennis Green over to the Mangamingi gliderport to check the strip. Sheep were present.  John Tullett took a trial flighter aloft.  Then he & John Spence were off on another JJ sortie and the usual 90 minutes thermal bashing.  Two for Dennis in TE comppleted the day.

October 28th was another busy day.  Jesse Robinson away in the Twin with Peter Cook.  A couple of flights for Dennis in TE and Gllyn took Nathan away for two flights in the Twin - 30 minutes & 64 minutes.  Will Hopkirk took the Janus away for a quick flight then he and Peter Cook had an exhilarating flight to follow up with.  Thus encouraged, Peter Cook made a conversion solo in that machine.  Much to his delight and that of everyone else.

That wrapped up the month.  Busy and eventful for all the right reasons.