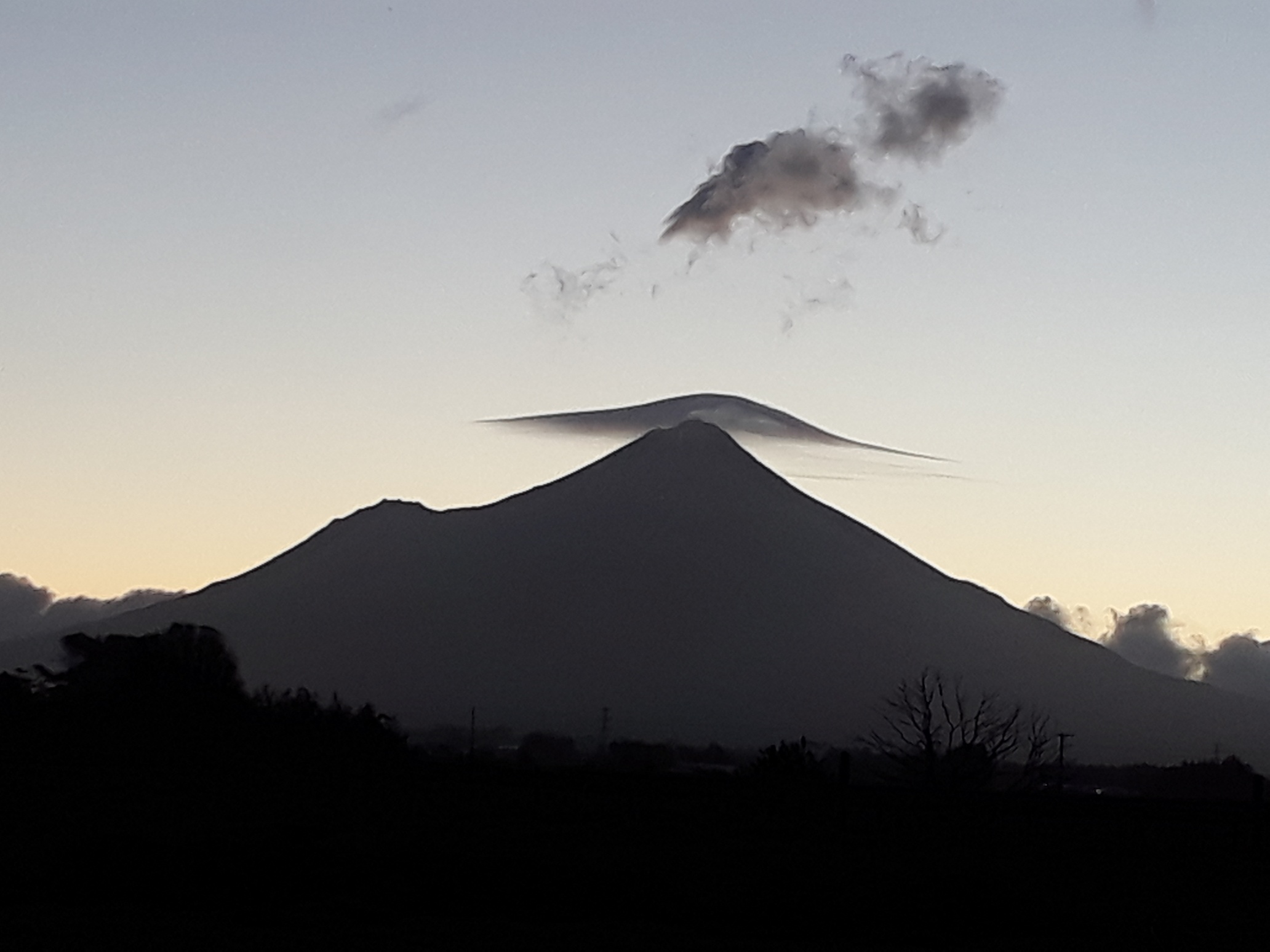 End of the day.

Peter Cook starts the ball rolling with a brilliant photo leading to head this edition and his account of his flight follows:

Chapter Two.    6 May SW Wave - a Maunga ripper!!! Glyn J made the rallying call the night before by email as changeable Wx earlier in the week was variable. A wet front passed through Sat night to present as forecast on Rasp and SkySight a dry clear wave day. All that was needed was to prove the forecasts. The sky was clear in the morning, a SW in Hawera, just with few scrappy thermals, embryonic convergence and hint of rotor around central Naki but tell- ale cloud was stacked on western flanks of the Mt and the Pouakai’swth the sign of curl-over. Glyn and myself showed at Stratford airfield at 11, in warm summer like temps and a gentle easterly wafting, not the upper SW wind direction.  All the signs aligned, Wx and visible indications, although there some doubt as where smooth wave could be contacted.

Many thanks to Glyn who made it all possible with his tireless V energies and skilful towing, also Nathan steading him. Les too for helping, with the launch, tripping to Hawera AC in TGC whilst staying in contact, curious as to my progress.

Now one from Dennis Green: 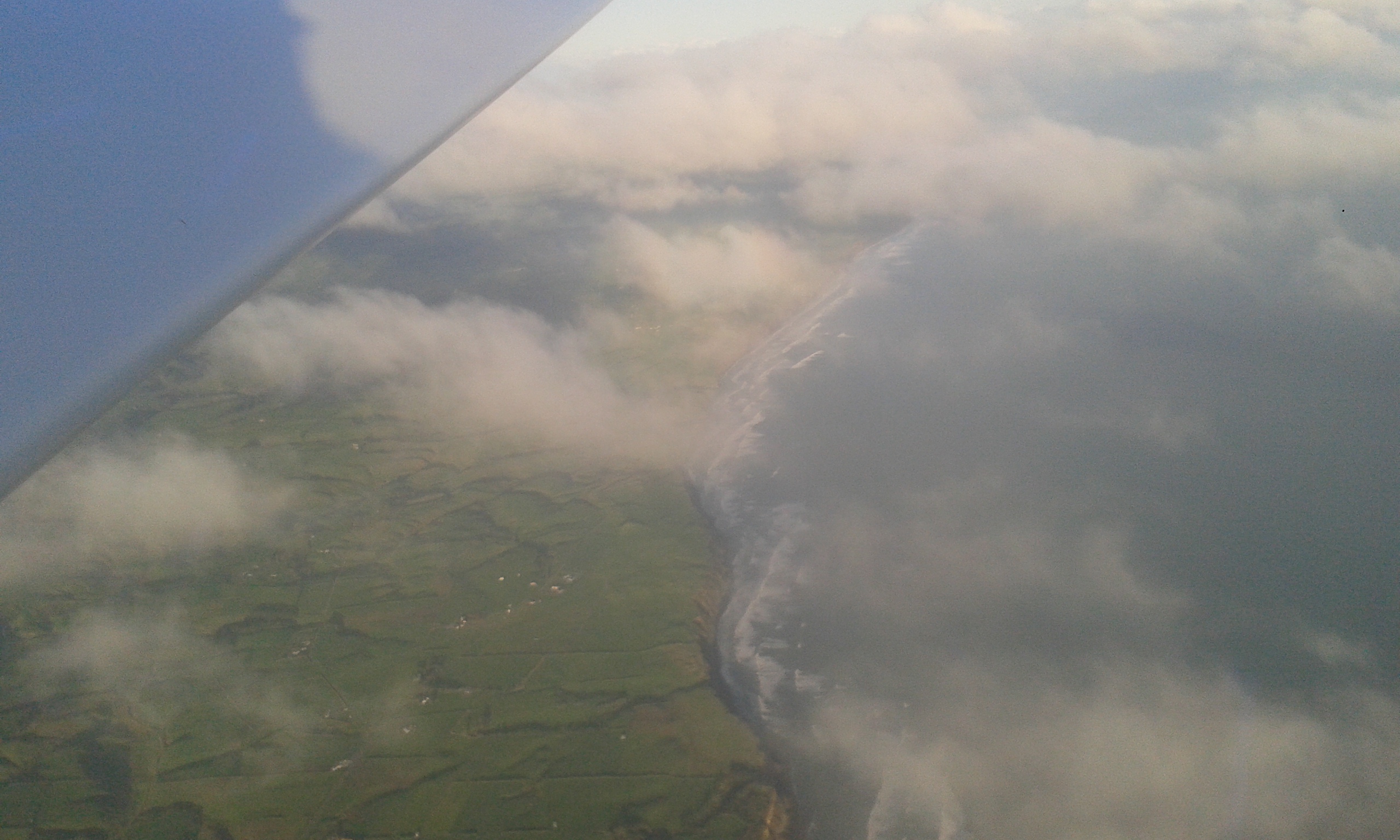 Denis & Les out over the coast SW of Hawera. 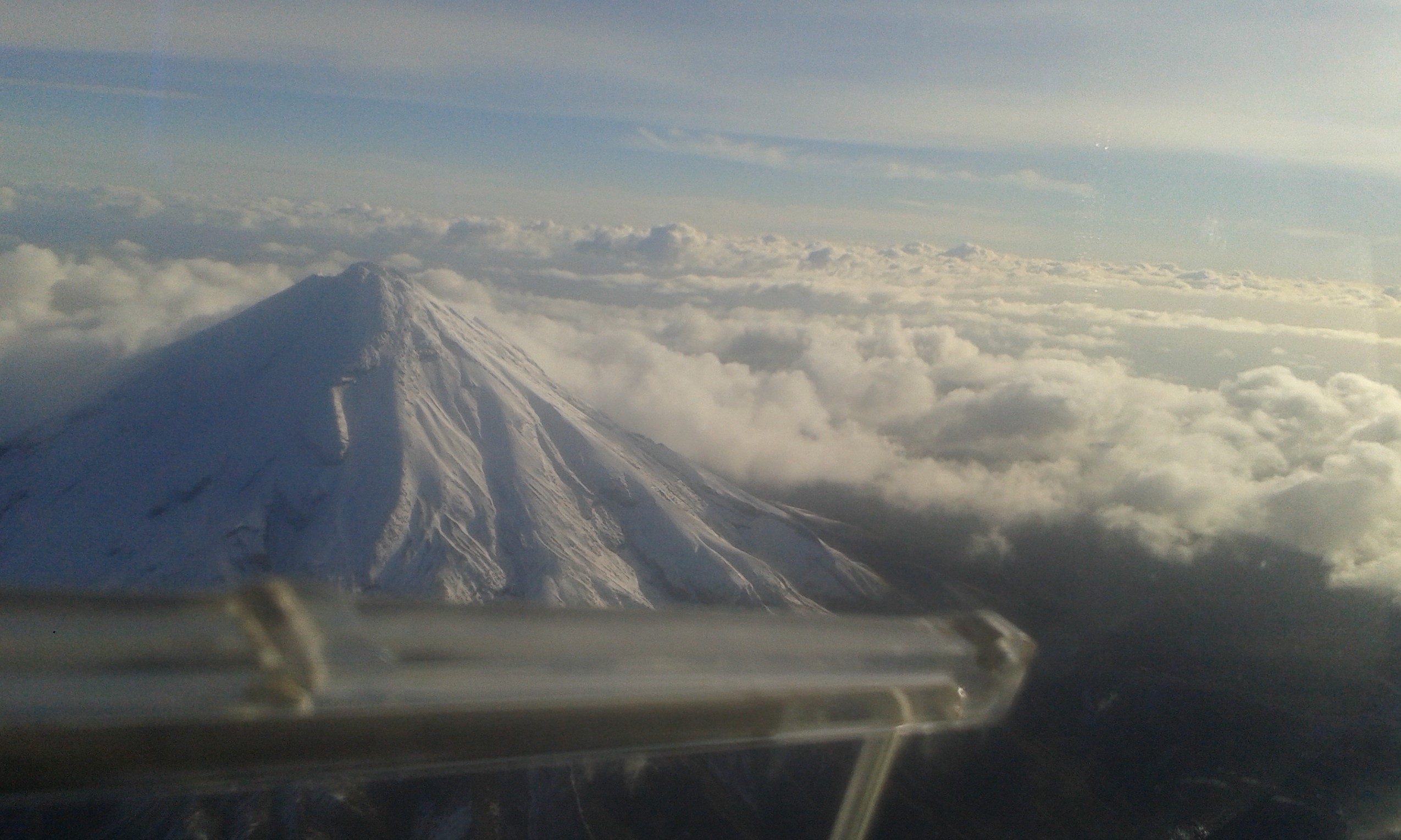 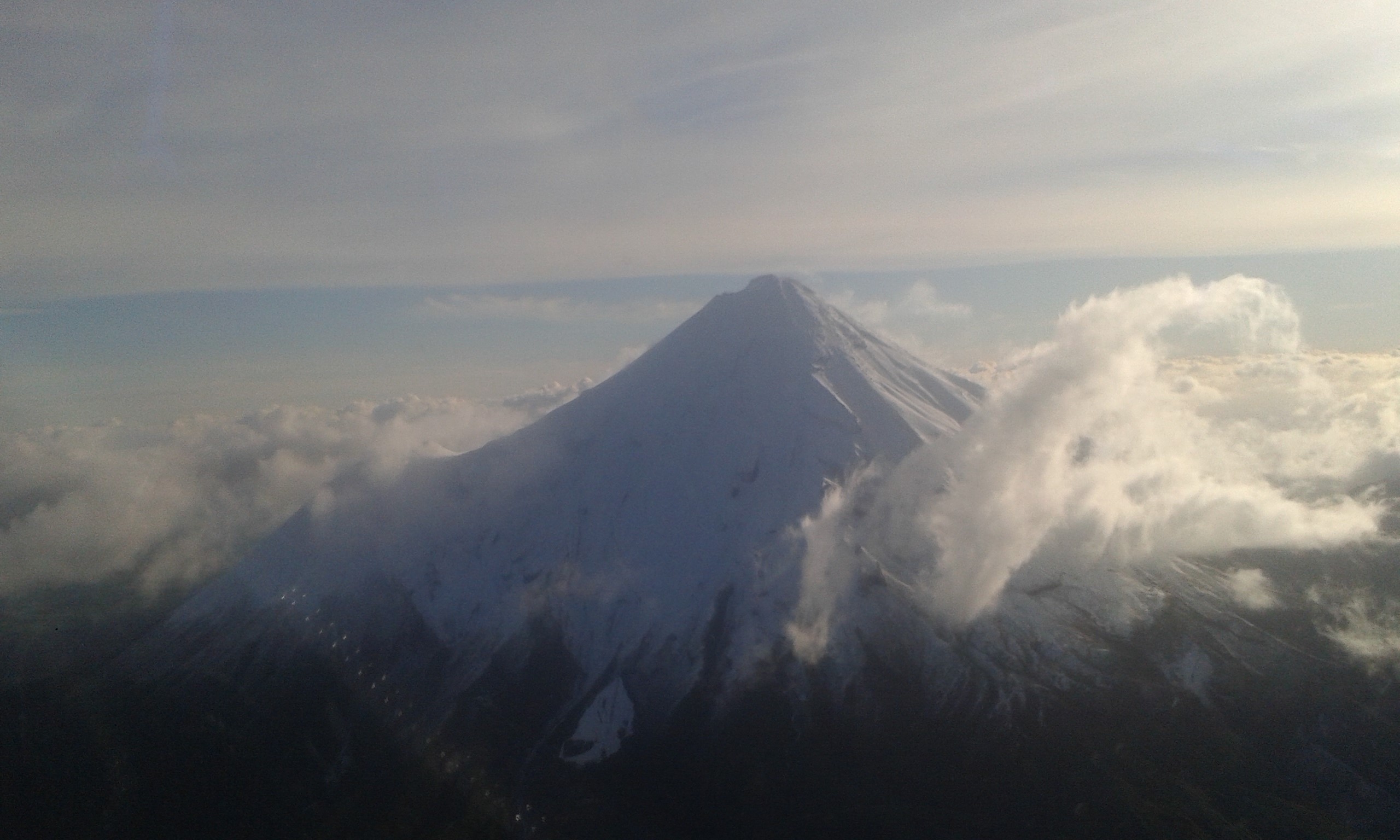 Don't mix with that rotor.  Photos by Dennis.

A day to treasure, believe in forecasts, ground observations and gut feel! Peter Cook. Now a story from Dennis Green for Saturday the 26th, which nicely imparts the bustle of the day. A wave day promised. Family stuff to do first then a call from Les,"am I going gliding?" "Yes I am!" NN is DI'd and ready. Ten minutes and I am on the road. Get to Stratford strip, gliders waiting ready, Les with chute on, hurry hurry. This is an introduction to a Taranaki wave flight for me. We are off, smoothest tow for some time, Glyn in TGC pulls us up, starts circling with the vario pegged, and release at 6300 asl. Soon have a steady climb, 2 to 4 knots, start lazy s turns. Looks like the ski field has a few tracks on it, but other stuff to focus on. Silky smooth lift soon has us at 9500 NE of the summit of Mt. Taranaki . A call to Christchurch Control gives us clearance to 13000 and we carry on. Just short of 12000, there is a Lennie sitting maybe another 3000 above us. Do we call the tower for clearance? Nah, too cold already. Ever been on a stationary chair lift on a ski field? Bring back the Tee bars. So we head to the coast off Hawera, have all that height , smooth air, no sink, just us and the L/D. Picked up a couple of paua and head for home.(Dennis is a fisherman as well as a ski afficionado, hence the stray references. Ed.) Bit of mental arithmetic , Stratford is attainable plus some, and home we go. The setting sun is nearly straight down the strip but a low cloud casting a shadow is a blessing. On the ground, 1hr 42min.

Next time it is just me and the PW5! 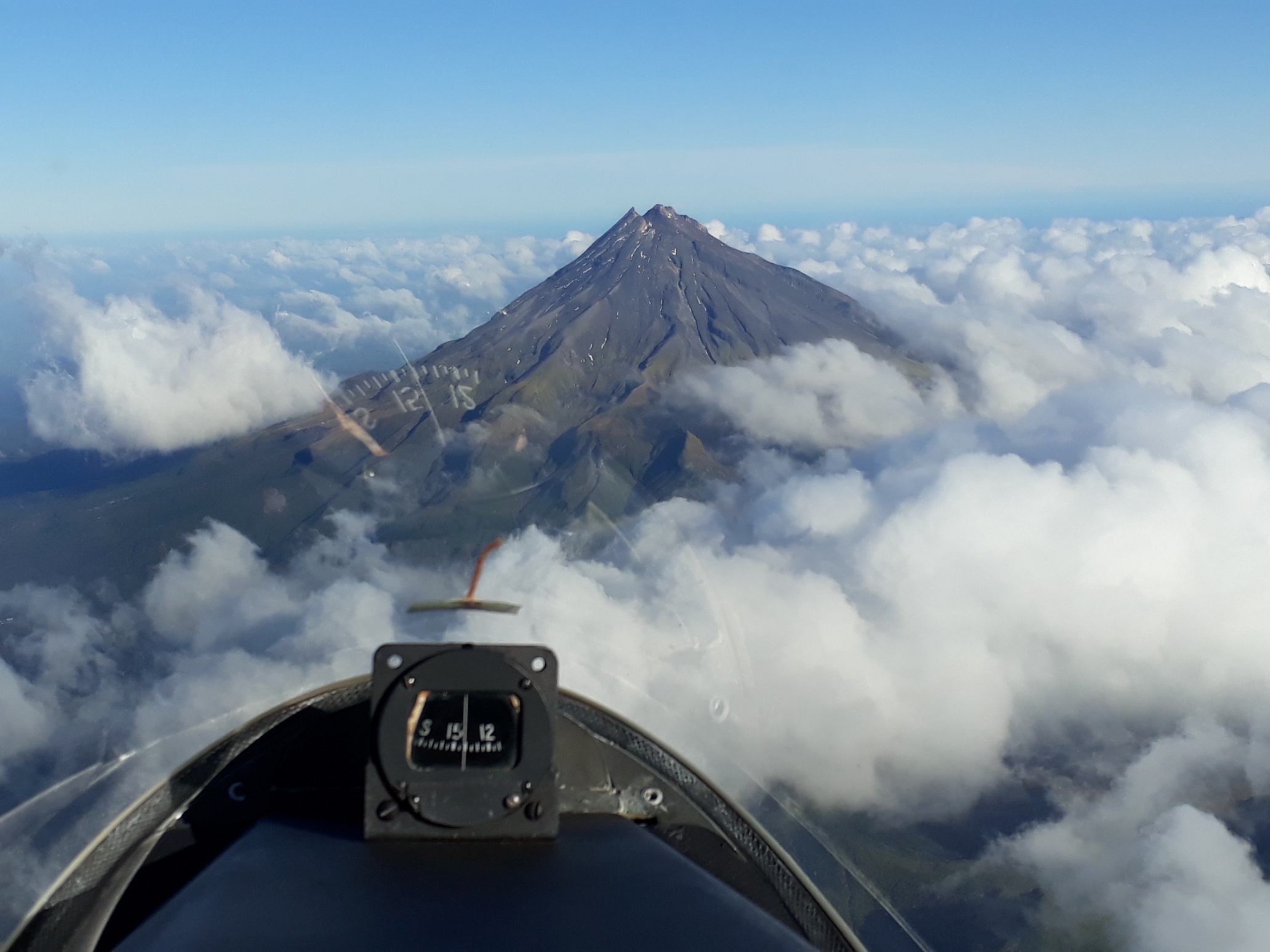 Another one from Peter Cook at about 5000ft.

From the Secretary:  A notice of a pecial General Meeting tio raise member subscriptions to $300 - read your notice and this time the meeting is to be by Skype - or something like it.

Apology:  Sorry this newsletter is a bit late but there was a Troll or something like it in the system which prevented editing.  All OK now.

Pat Struthers:  And we regret to advixe of the death of Pat Struthers.  Wife of Bob and a Life Member of the club.  Our sympathy to Jan, Paul, Lloyd and their families.  Pat wass of much help to Bob during the colossal amount of work during the early Germman Hill days and his competition flying.  Not to mention helping with the work associated with all the raffle sales.

Work happening:  Mike Strathern is now here to annuals on the club fleet and P/O gliders.  So, probably no flying for a couple of weeks or so.

May flying:  Not much at all.  4hrs:06m for Peter Cook in his Discus.  YeTi 1hr:42m for the Janus with Les and Dennis gradually getting colder and 2hr:51m for Tim Hardwick-Smith in his Discus.

25 Years back:  Understandable hiatus following Bob Struthers' death in February.   A good muster of past and present members at his funeral.  During March, Chris Griffin flew the Astir NG to 28,800ft.  A passenger rating for Peter Miller.  ATC and Scout flying happening. In April, some good flights over the ranges for John Schicker, Les Sharp and Chris Griffin.