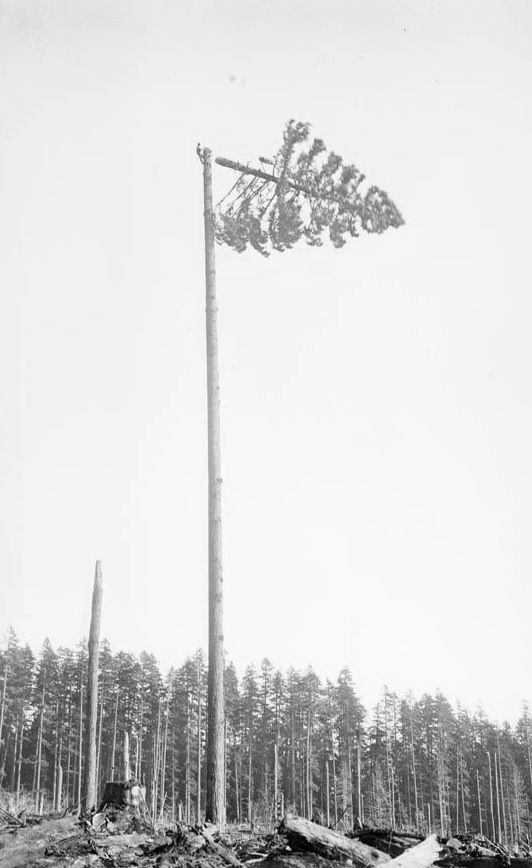 You may wonder why this photo is heading this Recent News.  I first saw this photo in a Vancouver museum and it has fascinated me ever since.  It shows the creation of a spar pole for Canadian logging operations and the point where the tree top fell away.  Note the branches lopped from part of the uppermost side of the falling tree-top and the man holding on for dear life against any whip of the trunk.  He had worked his way up the tree, lopping off branches as he ascended, spikes on his boots and  a wire strap looped around him and the tree, flipping the strap upwards every now and then.   Pulleys were attached to the pole at varying heights with steel cables from a steam hauler running through the pulleys.   This task rather more fraught than most of us have embarked on, it is quite dangerous enough at ground level, felling a tree let alone doing that 120 feet plus aboove the ground.   Rather puts spinning a glider in some perspective!!

As if on cue with regard to the above picture and derring do, Dennis Green has provided a great story about his flight yesterday.  An excellent way to start the month off.  His story below -

A cold NNW blowing and scattered fast moving cloud. Well it is winter, still, some say the first day of spring. Where do people get these ideas?  Dragging gliders and tow plane gets under way to the launch-point at a casual pace.  tThe is the wait and see attitude apparent here. Slowly a convergence line starts setting up to the south of Stratford. With the distance from the field and the headwind return it’s out of reach for the PW5 - at least getting back will be!  But the Janus is looking for people to warm the seats and Glyn is keen....

Shortly,we are hooked on and ready to go, I’m in control with Glyn relaxing in the back.  Jim is our tow pilot and we are off.  It was a bit of a rock ‘n roller but eased off somewhere above 1000ft  above the ground, then it was just rough air.  We towed to  3000ft  and released in lift still about 1000ft  below the convergence and slowly climbed to it.  Cloud base was mostly at 4000ft. we flew east and west and east again.  Found the lift to be on the shady side of the convergence line and at a point east of Eltham managed 4700ft for a while.  At one point of the flight we had 90 knots on the ASI and airbrakes out to stay out of the cloud.  I don’t know where that lift came from as mostly we had a comfortable climb rate of 200 to 400 feet per minute.

There was time to peruse landing options east of Eltham as Plan B, and Hawera as Plan C.  After about an hour I managed to find a big patch of 800 feet per minute  down and Hawera became the choice of destination while we still had sufficient height.  I do like the speed and L/D of the Janus.  A line of cloud was between us and Hawera, a slow climb ensued until base again and back over Eltham. The original convergence had broken up, we did a nice quiet glide to the west of the strip and set up for the downwind leg.  A steady cross wind on approach kept me focused and we touched down for a flight of a respectable duration of one hour and thirtytwo minutes.

Thank you Glyn and Jim.

Well, it was alright for them and it was alright for others too.  Youthglide member Liam Finer showed up and had three flights in the Twin Astir prior to which it had been taken for a test flight by Tim before Liam climbed aboard.. His last flight was for 42m.   Peter Cook had a flight in the Janus with Glyn after its return.  Late afternoon rain put a stop to proceedings.

September 9th:  more of a training day with three Youthglide flights spread between Nathan Whittleston and Connor Johnson, a BFR for Peter Williams and a couple of NN conversion flights for Peter Cook.  All good steady stuff.

September 15th: and another two instruction flights for Nathan, one for Peter Cook in NN.  Forty minutes for Dennis Green in the PW5, making the most of his chance with not much competition for that aircraft.  A solo for John Tullett restoring his authority over the Janus and John Spence and Glyn Jackson somehow found an hours worth of lift that everyone else had missed.

September  23rd:  a steady as she goes day.  Will Hopkirk showed up and was off in the PW5 - Dennis was away,  Two more Youthglide flights for Nathan with Tim Hardwick-Smith backseat,,   Peter Cook wheeled out his Discus following which John Tullett  rounded the day off in the PW5.  Most flights were of around the twenty to forty minutes duration.

The early days of the Auckland Gliding Club involved a Model T truck at the foot of a small hil,  the vehicle's rear end jacked up, wire wound in onto a wheel rim and after it's flight, the Primary Glider towed  by a horse back up the hill again.  All this from where Auckland Internation Airport is now placed.  Talk about humble beginnings !!

September 30th:  A convergence line set up over the airfield and pilots got their teeth... err...well their gliders...into it with relish.  No flights under an hour and most well over.  As typical of convergence lines, it grew to dominate the local airmass and thermalswere apparently unavailable east of Toko.  Neverthess, it became our equivalent of the Kaimai ridge.  Stories from a couple of the pilots to fllow.

Peter Cook had a flight - Spring Converging –  end Sept 2018 and a challenge: 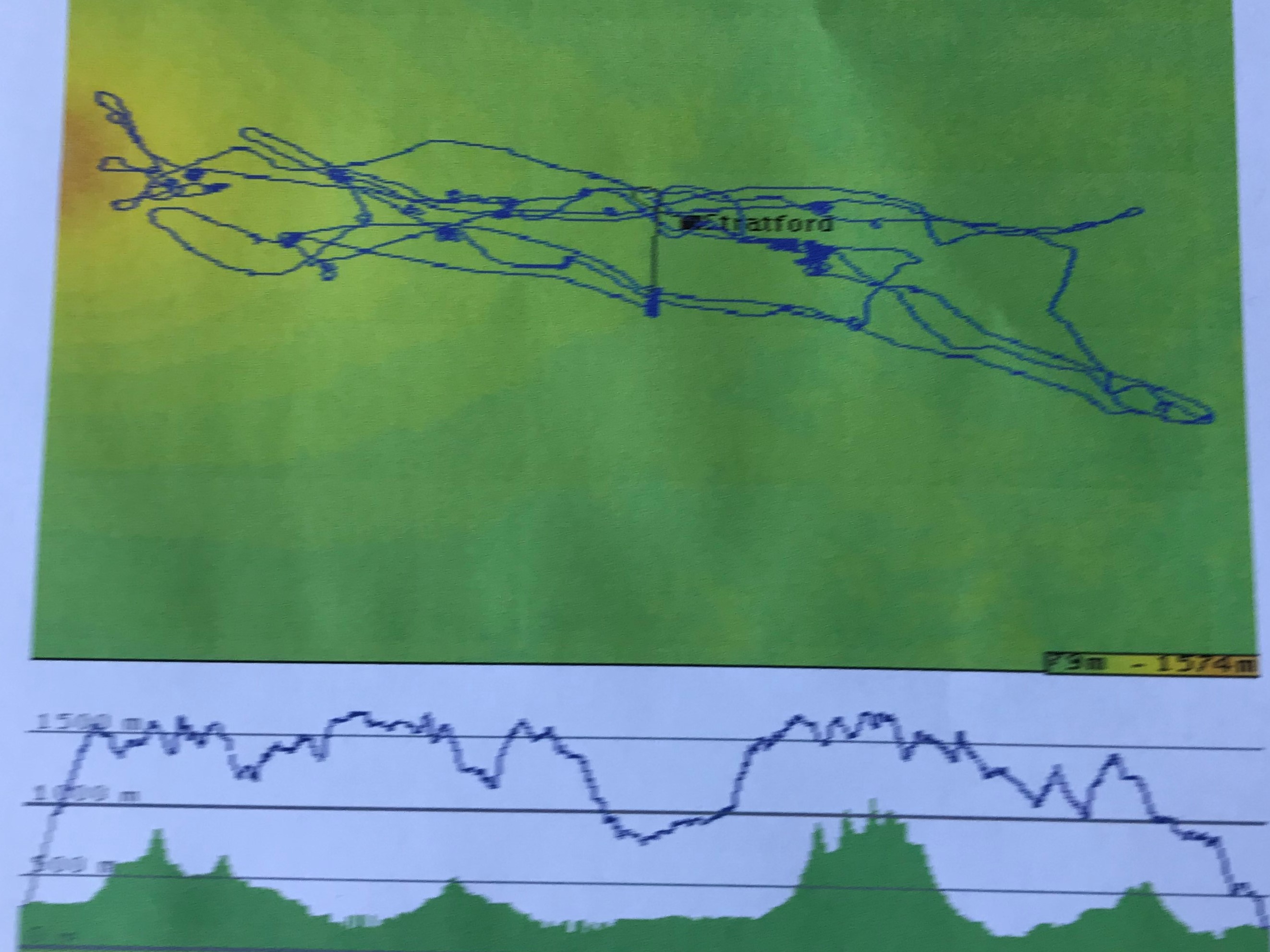 Tim towed me into a bute therm and YT climbed away for another run along the Naki convergence.

Had a nice 3hr jaunt from Dawson Falls, eastern hill country and return to north Egmont several time to build distance of 180km and speed of about 70km/hr, the objective of setting something for others to better soon.

Snow and rocks were wonderful around the Mt but sink not so, I had to be careful and pick the time to transit across the slopes. Out east the cloud base dropped, gloom and rain descended so had to keep a watch for return, once a bit low but always within glide of Straty.  Some patchy spots on the straight runs, clouds and other gliders to dodge but some therms pushed 15kts up!

And here is one from Nathan:

Saturday was an awesome day for flying with the convergence directly overhead. I released  over the racecourse at 2000ft agl in 4 knot lift. After 1 and 3/4 hours and a couple of trips from the bush line to Toko and back, I hopped out the side of the convergence and cruised down to join the circuit. The day had so much more left to give, but I figured that was plenty for one day with Tim and Peter waiting on the ground for me as I was the last flight of the day.

Good one Nathan.  We look forward to reading more stories in the future. (Ed.)

So, September ended on a positive note and hopefully the harbinger of things to come.

June - Another proposal to fly from Norfolk airstrip turned down, the reason that a division in activities would be of minimal benefit. 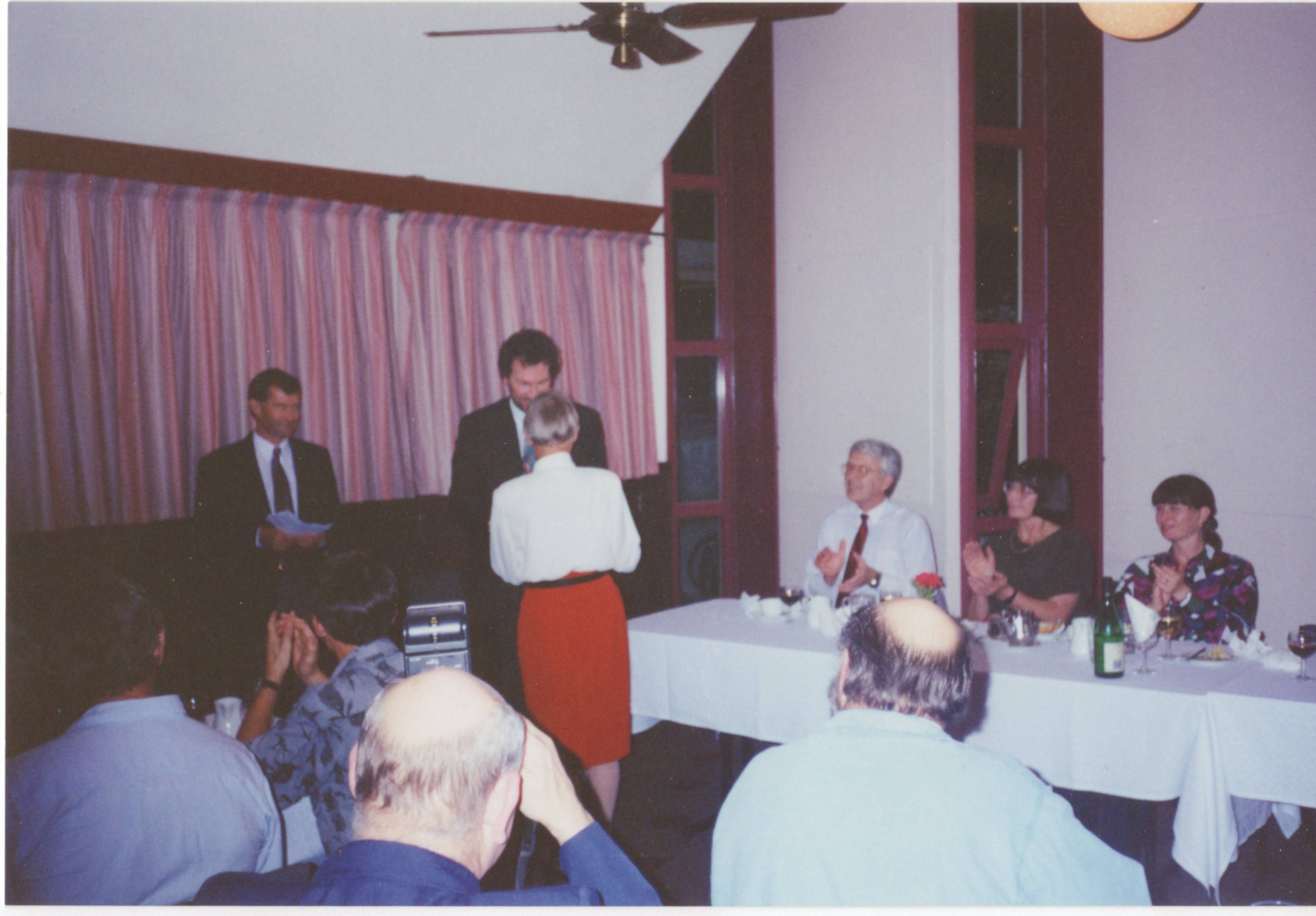 - At the ZNGA AGM at Wellington, Pat Struthers accepts  the Angus Rosebowl awarded posthumously to Bob Struthers for his work for gliding and national fundraing efforts

- Five hours and twentyfive flights for the Blaniks during the month.

July: - A lament from Matthew Conner - the Tugmaster - about the travails of the Piper Super Cub - BRY.  Off to Hamilton for a top overhaul.  An enquiry made as to whether there any surprises?  Yes was the reply, there were.- Two cracked cylinders, one stuffed piston and a defective magneto.  A suspect carb plus repairs to the exhaust.  $5.000 plus - quite a bit more in today's money.  Perhaps he shouldn't have asked!   A meeting for all tow pilots to be called.

- A tow rating for Ian Hayton.

September: - A bit over 13hours flying for club aircraft and 50 flights.  Matamata trip being planned.  Rod Smith received some 'positive feedback' from a pregnant passenger.

That's enough for this month.  AGM details in next month's News.  And a story from Tim about his excellent flight into some Tiger Country.