A story from Taupo by Peter Cook:

A front had gone through and a Monday holiday for us in Taupo so had a ring around for X-country and had enthusiasm form Brett, Hugh, Trev and me. But surprisingly, others showed up to fly the club fleet. on what was a normal work day.

Arrived, milled around, rigged, prep and planned to launch early as tow pilot Brian was off to work at 2pm. Launching was delayed by a bright Hong Kongesse student Birdy on his first solo set of flights in ASK21 – we decided he may need the full extent of Centennials strip. He did well.

Prepared and tow -out to launch 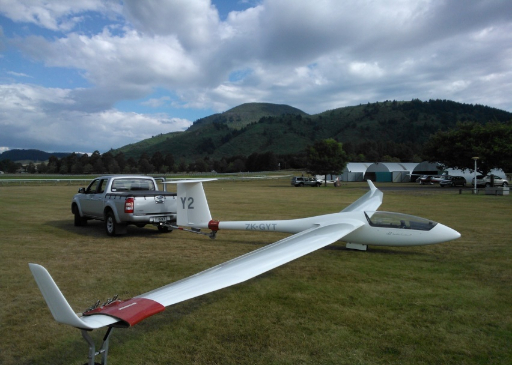 We launched from half past twelve- Hugh kindly swapped his Ventus for Pawnee launching as an arm twisted Brian became more energised by impending work commitments. Many thanks Hugh, for the launches into the valley.

Gosh, even though first away I couldn’t get out of the valley! Rasp said it wasn’t going to be good there, it was lake breezed and over developing - just got worse but ripping out east. Having spent mega on more performance how could I connect with this lift? Feeling dismayed as most flights in the Discus to date had been shorter and slower than in Libelle IA, just not in the groove yet! Flew YT toward Ohaaki chimney, then west, out east a couple of times onto the valley edge whilst Trev and Brett had drifted out toward Matea so thought I’d give the forest cut overs a go and there was enough to catch Brett in the Jantar. Duo Trev was now passing Rangataiki at speed and a commentary to match. Stumbling into a blue thermal I pushed on and the conditions improved from a few knots up to more. Finally connected with real conditions past Rangitaik into Poronui on the SE ranges.

There were black streets running through the ranges, with 7,000 to 7,500ft bases, Trev was in the Kaimanawa’s somewhere , talking about Ngamatea on the Taihape side. I just pushed into Waipunga falls on the Taupo/Napier Road then headed toward the Boyd strip in steep bush covered steep back country terrain. What views and lift. 80 to 90kts and still going up! Jumping streets it was down and the ridge lines appeared quickly ahead along the way some wee diversions were taken. This was great stuff and Trev popped out again in front. We decided to head to Minginui in the NE, a farmed valley surround by bush clad hill on the edge of the Ureweras. Brett was heading back to Taupo by now and Trev meandered in the Matea area whilst I found myself heading off alone over the eastern hill country tracking over more wilds Minginui bound. Fortitude began to wain the further I pushed and Cirus was coming in from the west – still pumping in the wilds. The trip back to Taupo was beginning to look like work and Brett was scratching over the Te Awa Camp locked strip in the middle of the forest.

I drifted to the top end of the Goudies farm block for a final climb for glide home rather than east. Here it was scratchy stuff although Trev arrived lower and tickled toward Taupo, picking scraps of lift over the forest for a glide home after Brett. I hung back for more height to be sure but it didn’t come – conditions were fading.

Below glide slope to Taupo and leaving Goudies good back strip, I opted to glide downhill to Goudies inhabited parts, in search of their HQ strip. On arrival, near circuit height, I couldn’t spot it as seemed to have been subdivided with permanent fences. Little lift here so a paddock landing was inevitable. Trev, now overhead Taupo GC, awaiting my final call and once done a low circuit to slight uphill drilled paddock, near farms houses but downwind by a few knots. Man was the ground hard! Rough and there was a sploshing sound – yep pats, crusty on top and moist under.

Relieved to be down undamaged and on Chinese territory too, an ex Crafar farm. Agent Birdy was happy to be in attendance, his first LO and derig, astounded by the environment although disoriented and didn’t enjoy the pats or the accompanying bugs. A city lad with a very keen interest in casinos.

This was the second land out in succession in YT and about 30km from Taupo. I had covered a few hundred km in around 3 hours this time. Should figure out my Oudie track records.

Helen, Trev and Birdy to the rescue, another Broadlands story though. A supposed missed turn offs, zip through an under pass, lumpy farm tacks and to finish in a top class restaurant for drinks and dinner.

Many thanks everyone for the good company fun day – beats the office every time! PC.

Dennis Green writes a “how-I-We-dunnit” account which is about time because he seems to garner extended WZ time quite frequently.

A cool breeze off the mountain, easterly, straight down 027. Thermics zero. Blue above the strip, a convergence line towards Waverley and broken cloud to the North.

Prep and D.I. WZ, while watching a convergence trying to establish close and to the North of the field. Get ourselves down to the end of the strip, hook up, time to suck it and see. We towed out with Ralph piloting TGC (mellow yellow), Tim in the seat behind me. We had a slow climb out with calls to increase speed, air a bit bouncy at times, and pinged off at 3000’ over the east end of the strip. Thanks Ralph.

Poked around a bit and found good lift and in short time we had a steady climb to 4000’ and base of the convergence. A run towards Pembroke gave us a steady 200ft down. Back to Midhirst and north and west to Te Popo was where the lift was. Over an hour passed running the convergence from north of Midhirst to some distance west of Te Popo and points in between. The cloud began to open up and disperse so we attempted a run towards Pembroke to try and connect with cloud which could have been useful. Just over the main road north of Stratford we hit lift and sink we could not use, nor live with, so turned for home.

Did the checks, down wind and on to the ground. One hour thirty-three minutes. Not too bad for a cold breezy day.

Well told Dennis. It was a case of being first up and best dressed. Others had varying levels of success.

I appreciate the effort people make to tell their story of the day. Makes my job much easier and adds an air of authority to the narrative.

This is a photo of Sam Tullett on short finals in the PW5 and on his way to a good cross-wind landing.