This Recent News encompasses a bunch of flying days.  Not that it was intended but several factors intervened which left me either with no spare time or not really feeling up to begin tapping the keys.  My first duty was to either prepare accounts or attend to flying timesheets and the fees payable.  So I did those tasks.

With regard to the flying, we now operate some flying accounts which are quite good but it would be ideal if these show a bulk payment every now and then topped up when required.  These accounts arose from the need to reconcile one member’s flying costs against monies earlier advanced.  It was a simple structure but has now evolved to the extent that the accounts now show the credit total, flying fees, payments made and then further monies paid in, giving a running display of what has happened.  The advent of Eftpos payments has altered the “pay on the day” practice that we have had for many years. I’d introduced the Flight Log to keep accurate track of flying fees/payments and it also acts as a receipt.  An unintended consequence was that pilots began to wait until it was out before making payment.  There were also odd amounts being paid or none at all and this caused me a lot of concern in keeping track of the situation.  Peter Williams brought his genius to the fore and these accounts go very well indeed, in showing the current position.  Not only that, the Flying Sheet is now a live document in that the fees calculate through for towplane and glider.  I then show a summary of aircraft hours, flights made and what sort of flying has been done which hopefully is of help to the CFI and Peter Williams with information that needs to be supplied to GNZ/CAA.   Flying Sheets at their worst, look like a dog’s breakfast.  Latterly they have been much better.  I can though, only proceed on the information supplied.  Tow heights, full names, glider times are critical.  Tow pilots could start using a knee pad to record tow heights and instructors should ensure that someone is detailed to look after the Timesheet, the Temporary Members Book and any relevant detail.

Then get the Time Sheet to me.

Goodness me, that might just about do but I’d better say something about the flying.

Let’s start with January 22nd which Will Hopkirk had all to himself.  A 30m flight then a 15m flight in which he turned the wrong way, made a better job of finding sink than he did lift.  Tim did the towing then went off on a farm inspection by air.

On the 24th there were no fewer than seven trial flights. A short flight for John Spence and a tour out over the Pouakais by Les Sharp in the PW5.  Then an “out-landing” at Norfolk.  The tow plane went over to tow him out.  Matt Connor on hand to run the wing and watch the ensemble chug away.

Les tells of his flight:

After doing 7 tows from the start of flying I noticed a familiar person arrive and start looking around. This was Stu Watson who is a fellow volunteer at the local Hospice Warehouse. As WZ was sitting idle, I suggested to him that I could take him for a flight. He took the opportunity and although it was basically a sled ride from when we released from the tow, he enjoyed it immensely.

As TE was now idle, I took a tow to 5000’ over the national park under the convergence, gained 500’ quite quickly and all seemed happy. As we know, gliding can, and does, provide little surprises and the sink was also evident and soon annihilated my initial gain, however I managed to climb to cloud-base then moved out beyond the northern edge where I found lift up the face of the cloud (no doubt it was better inside the cloud, but TE doesn’t come with a gyro instrument and the granite portion of cumulus granitus [cloud with rock in the middle] was in close proximity). Eventually I made it to 6900’ although 6500’ was the top of most climbs. After playing there for a while I decided to explore what might be happening around the north of Mt Taranaki. I lost about 1000’ getting there, but that wasn’t a problem because “there should be lift there somewhere”. There was a promising looking cloud against the mountain, but the outer edge showed no sign of lift and there wasn’t enough movement to indicate which way the wind was blowing, so I chose to fly under a cloud that was not far away over the Ahukawakawa Swamp. The vario just kept pointing to the earth below. Although I hadn’t been there for a while, I had spent quite a bit of time soaring around the area when we operated from German Hill and I felt that I was now a bit low to try a direct track back towards Stratford, so I headed around the west side of Pouakai peak at about 5200’. Looking for some sign as to what the wind might be doing, in all the visible tract of farmland, there wasn’t a single fire (smoke) visible. A bit of lift on one face of Pouakai peak proved too small to try and work without getting too close to the terrain. By now a land-out was definitely a possibility. Tracking along the face of the Pouakai Range there were some rolls of cloud out in front but these didn’t provide more than a slight flicker on the vario. I was much closer to Norfolk Road and so that was the safe option. I arrived there about 500’ above circuit height and did find a weak thermal over the truck dismantlers yard at Rugby Rd, but  was only maintaining altitude for a couple of turns, so I set up a circuit and landed. A few minutes after landing, Mathew Connor drove in. He assisted me to push the glider back to the fence, and we established from the farm worker that Kevin was away for the weekend. The Eurofox arrived, Mathew hooked the rope on and ran the wing (thanks Mathew for driving in at the right time) and the tow back towards Stratford was much appreciated. 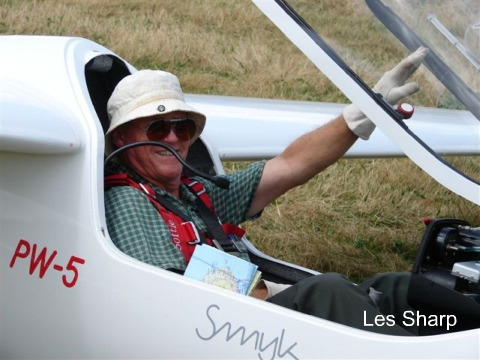 The Foxbat JTA came along and towed a couple of the P/O gliders.

Now for the 31st:  Not such a good day.  A couple of trial flights, one flight for the Ventus, fifty-one minutes for Dougal Wickham in TE  three flights, forty-six minutes for John Spence in the Twin.  Five hours thirty & 18 flights.

February 8th and the weather still wasn’t too bad.  John Took his Headmaster’s wife for a good long flight and John Spence  re-soloed, having last done so in 1999.  Followed that up with a twenty-eight minute flight.  Way to go John.

February 13th- This turned out to be a good one.  A flight for temporary member Ross Gavin, three T/F’s, JT away in DN for an hour twenty minutes, Tim in the Discus for two hours and thirty-four minutes and Will Hopkirk away in TE for an hour and fifty-two minutes.  And to wind up the day, Dennis Green and John Tullett had a great flight out over the swamp in the Twin.  It all made for interesting listening on the radio.  Must make mention though that Dennis Green, thinking that he had irretrievably lost a fistful of money from the previous week, found it safely on a chair in our hangar.

Seven hours and one minute for the day with nine flights.

February 14th- A different day compared with the Saturday.  Only Peter Williams, John Spence and Les Sharp were on the field.  A check flight for John and he had two further flights of 33m and 2hrs 20m.
John said that after the first flights, the thermal trigger point was reached and things were booming, eight knot thermals left right and centre.  Says he only came down because he felt sorry for Peter Williams who had one flight of thirty-three minutes but wished he’d gotten his own glider out but with Les having gone home it was too late.

Today I wore my towing hat.

Peter Williams had got to the field first, followed by myself and John Spence a short time later.
WZ and TGC were DI’d and  runway 27 selected. Clouds around the field looked low, and this was confirmed by one of the power pilots who had just landed.   However, the sky looked better by the time we were lined up. John Spence was first away for a circuit check with Peter Williams. Next was Peter by himself, then John who managed to stay up while we consumed our respective lunches. The local lift was under cloud streets along the wind line and they would work for a while, then collapse as John was to learn. All the while a convergence sat to the south, just too far away unless one took a high tow towards the mountain (where there was a visible step in the cloudbase) but no-one dared to try.
Just after 1400 (2pm for landlubbers) the convergence was noticeably closer so John launched again, got away with a 1900’ tow to the north of Stratford town, and was still up when I left the field over two hours later.

I did feel envious that there wasn’t another tow pilot around so that I could have joined him in another glider.

Meanwhile our resident Ventus driver is at Waipukurau at the Regionals there.  Doing quite well, I believe.  He and his family had also been with the Wanganui/Manawatu club at Kawhatau and then to Taupo.

25 Years Back:  Can’t get at the info on this, will add this when I get home. 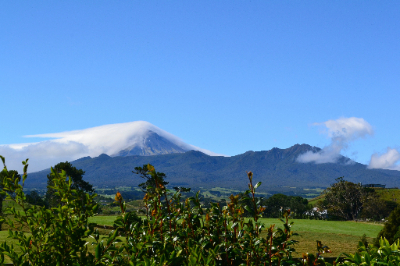