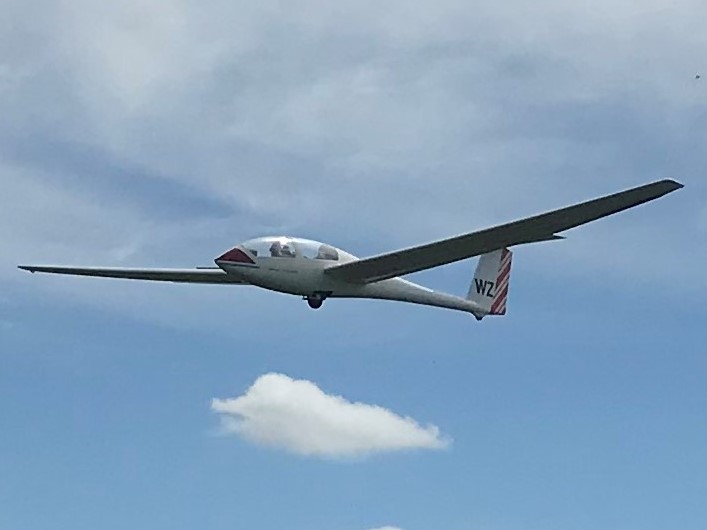 Not sure who took this photo but I rather like it and it is the lead photo for this month.  Copy for the month is plentiful enough but some personal details have interrupted typing them into the website.  That a few days at Taupo can't really be blamed because we were in a non-wifi area.  Never mind, being out on the water was good with a grandson showing enhanced skill at ski-ing.

8th December:   Two NN checks of Peter Cook by Tim, solo flights by John Tullett in his K6 and one by Dennis Green in the PW5.  Then a flight in NN by John Spence with Peter Cook, this was followed by a Trial Flight for Stacey Marshall by Tim.  Most of the six fllghts were about 30m.

16th December:  Hour long flights for Dennis Green in the PW5, Les Sharp and John Spence in the Janus NN and Peter Cook in his Discus YT.   And another hour in NN with Les Sharp and Dennis Green who claims he was just ballast.  Nathan Whittleston must have missed the thermal cycle for he had to be content with just 14m.   Six flights for the day.

23rd December:   Four flights.  Sam Tullett with Liam Finer for two of them then Nathan Whittleston 27 minutes in the PW5.and 3 hours for Peter Cook in his Discus.   Andrew Berry arrived and moved into the tow pilot's seat and commenced towing duties.

28th December:   Liam Finer had two good flights that day - 38 minutes with John Tullett in the Twin Astir WZ and followed later with Will Hopkirk and 52 minutes'3.5 hours for Sam Tullett in the family K6

29th December:  Two T/F flights for Andy Leader and Bo Mullin.  The flights shared between Les Sharp and John Tullett.   And that was it for the year. Not finishing on a frantically busy note but fly we did.

Those were the days!!

All the best for the New Year everyone.