A lot of no flying has happened over the past few weeks. The prime reason for this has been that all the gliders spent some time in bits, strewn all over the hangar floor while itinerant engineer Mike Strathern attended to their annual inspections and to the repairs that were found to be required. As well, its rudder mounted ASI pitot tube needed attention and this required the cutting of a hole in the vertical fin to enable this. TE needed attention to bottom rudder hinge but the cost of the work on TE was not too bad. All in all, the thoroughness of these annuals was long overdue. Mike was aided by several club members who also toiled away on their own gliders. There remains though, the glider Tost tow hooks which will need to be replaced (or repaired) I'm not sure which. Thanks to Peter and Helen Cook for hosting Mike for a couple of evening meals. Tim, who was there most days, bought him lunch. The Eurofox was also given its Annual Inspection so as to bring it into line with the other aircraft, club and privately owned aircraft. A busy couple of weeks for many. The subscription notices went out at the beginning of this month and I've already received a few. Keep the subs rolling in please so that you're street legal so to speak as far as flying club aircraft. Also somewhere between here and the UK is a new Mode S and ADS-B capable Transponder for the Eurofox. This good device will be welcome news for Air Traffic Control so they can see it chugging around the sky towing gliders aloft. The ADS-B capable bit refers I believe to the ability of other aircraft to register the presence of the Eurofox chugging around the sky........ So we can say the Eurofox is future proofed in that sort of thing as well. This is a thinking club and one of the thoughts being mooted is a trip to Taumaranui in the latter part of summer next year. The Vintage Glider people enjoyed a stay there last summer. Glyn, Clinton and Kevin relished their time there with Aussie type thermals available. I’m not sure that a Ventus 2 is a vintage glider as neither the glider or its owner/occupant are showing any wrinkles as yet. Now, the K7 and its equally venerable owner, demonstrate both the above requirements. 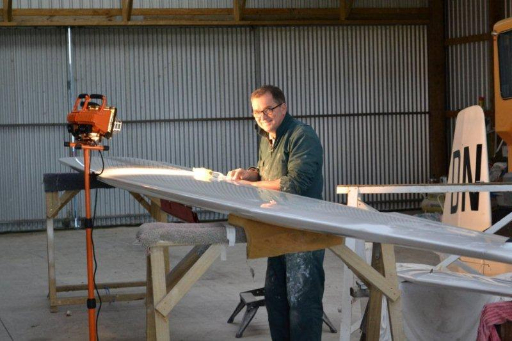 Mike Strathern at work on a wing section of Peter Cook's Discus. 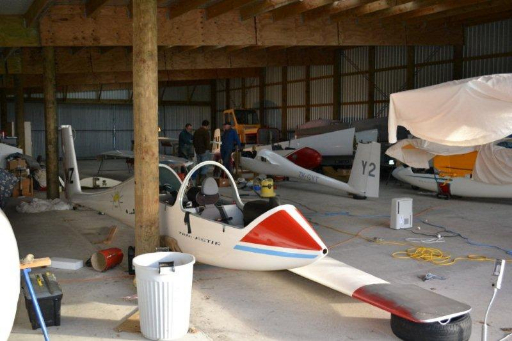 These pictures were taken on June 21st in the midst of the carnage. Tim arrived while I was there and he thought he would like a look at his farm and the Eurofox would do the job and invited me along as ballast. He was kind enough to not say that I filled that role amply but who am I to turn down an aerial tour of the hinterland. Interesting to observe that the Patea river exiting from the mountain was running clear but was muddy brown after the junction with the Mangaehu river which would have contained topsoil from all of the surrounding land, plus some from the Hopkirk ranch no doubt. The storm that did that damage, also thumped a slip down onto my farm track. The slosh and rubbish took us a few days to clear. Tricky work on a wheel tractor with several hundred feet of clear run to the bottom if you got it wrong. 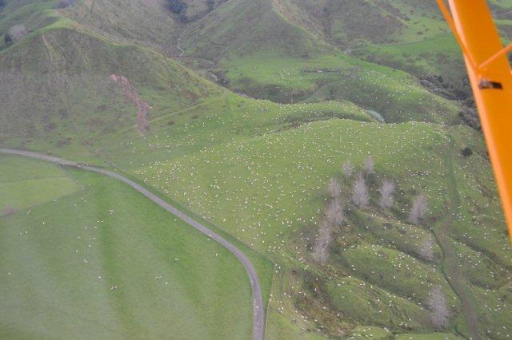 The Kohunui Trust ewes enjoying fresh pasture after a shift earlier in the day. Note the fresh slip onto the track at left. 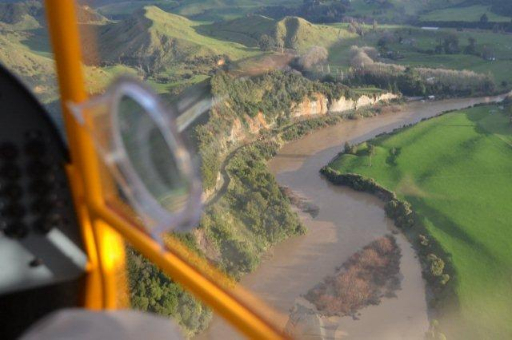 The Patea Dam. All muddy brown. Some of the suspended silt probably from the Makahu road area. A digger is at work clearing a slip half-way along the cliff face.

There is work planned for this weekend to put the new hotelier bearings into the Twin Astir aileron rod joints. Hopefully the aircraft will be ready for the next weekend. 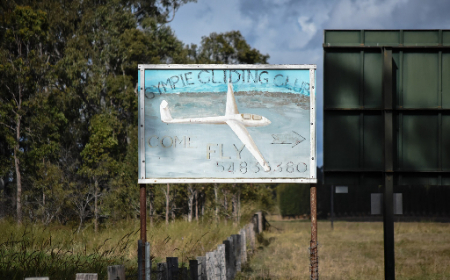 Finally, Tim took this picture of a rather battered Gympie Gliding Club sign. Apparently they get some pretty good heights from their winch launches.

And wait.... there is more! Work on the Twin Astir is planned for this weekend to install the new hotelier joints. Hopefully the aircraft will be ready for the following weekend.