Well, what a good weekend it turnsped out to be.

On Saturday Les Sharp arrived with the Hawera Tecnam. First off were Glyn Jackson & Dennis Green. A reasonable tow height of 2200ft but they failed to connect with useful lift. Glyn was so mortified that he paid half the tow fee. Next, Julie Woods had more good fortune. Built-in insurance of a 2800ft tow followed by a fifty-nine minute flight.

From the top of that tow, Les departed for Norfolk to haul Clinton Steele & Kevin Koch into the air. The Norfolk Wilga is sans donk. That item off to Bulgaria or somewhere to be repaired. A good flight for Clinton of two hours. The air not very useful near the mountain. Kevin beaten by gravity after 34 minutes. Back to Stratford where Will Hopkirk took daughter Libby for a long awaited flight. The wait worth the while. They worked cloud-streets and the flight lasted one hour and thirteen minutes. She was still beaming the next day. (see the photo of WZ getting a hug.) The Tulletts had mixed fortunes. Sam broke rule #1 in TE, taking a 1500ft tow and back on the ground in twenty-two minutes. Father John a bit more circumspect. Going to 1700ft in DN and getting an hour thirty-eight minutes. Could also be the result of not going into dead sky. Steve Barham didn’t go into dead sky either and achieved fifty-nine minutes in TE. Eight hours and thirty-eight minutes for all concerned. Will got to over 5000ft and both he and Steve Barham appear to have covered some good distance.

Fortunately flying was arranged for Sunday. Three trial flights. All given good flights by Peter Cook in good lift conditions. On towing duties was Jim Finer in JTA. No need for heights much over 2000ft. Jim off to Norfolk again for Clinton and Kevin. This time their fortunes were reversed. Clinton went on side of a cloud and Kevin the other. Clinton back on the ground after thirty minutes and a tad over an hour for Kevin. Roamed out over the Pouakais. Peter Williams took GH out for an airing and just missed two hours. Also just missed landing (rule #1) but managed to get away from a low point of about 1000ft. Encouraged by all the good things going on, the author of this article and Peter Cook as mentor, towed off in the direction of Midhirst. Reasonable tow height but an unreasonable place to go. The houses kept getting bigger and the clouds kept getting smaller. By combined supreme talent, skill, knowledge and inordinate luck, (more of the latter I hear you say?) they dug themselves out from there and headed eastwards. Not all that rewarding to start with but as they got higher, the reward came in the form of steady, strong lift all the way round the turns up to cloud-base at about 4000ft. Repeated that effort after losing some height where lift wasn’t and then a fast run towards and over Stratford back towards Te Popo. WZ covers a lot of ground flown at good speed. My thanks to all for their encouragement and help for my chance to fly.

Seven hours and fifteen minutes for all the gliders and a total tow height for JTA of 14,000ft. Once again everyone went home happy. Too good to last I expect. This anniversary weekend a bit scruffy for the first two days but Monday might be OK.

Clinton tells me that Taumarunui is a great place to fly from. Seven to eight thousand feet thermals – just like Benalla. Glyn enjoyed his time there too. Maybe we could hope they organise a club trip there next year during the good part of summer

LibbyHopkirk hugging the Twin after the flight with her father, Will. 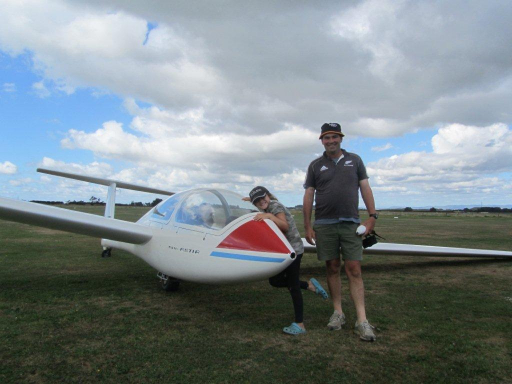