November 7th went very well indeed really. John Tullett and Dougal Wickham opened the scoring with a 35m flight and then the old firm of John Tullett and John Spence replied with a 49m flight. This was to have a follow-on effect but more of that later. Steve Barham rocked up and produced a 1hr 7m flight in the PW5. He hasn't told me anything about it. The instructors having had enough of Dougal Wickham flying in front of them, sent him solo and to show it was not a fluke, he turned in a 38m flight. Well done Dougal both for that and applying yourself assiduously to your training. John Tullett, seeing what Dougal was up to, launched in TE and was away for 49m.

Below: A happy Dougal Wickham. The flight completed. 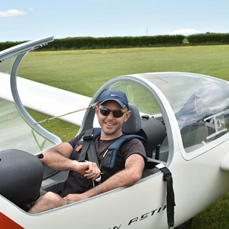 Dougal Wickham post-solo 7 Dougal described the day as being “quite buoyant” and so it must have been but a bit of skill helped a lot too, I would think. That brings us to the 14th of November. In one way the day delivered less than promised but in another, more than promised. A couple of flights for Dougal with Tim, 33 and 51m respectively and then a dogged tussle by Les trying make sense of peripatetic northerly wave effects. His flight lasted 51m. Seemed longer to those on the ground trying to keep warm. However the important news for the day was that John Spence decided to have another go at gliding after an absence of more than twenty years. Not that he did not do any flying in the interval, having done one or two flights every year over the years. John was a tower of strength to the club over many years. Was a Housie Raffle organiser, Secretary, editor of the Newsletter, instructor and CFI. He has a Silver C Badge and for a year or three, was a partner in the Richard Halstead Nimbus 2 syndicate whilst at the Wellington Gliding Club. Welcome back John. Enjoy some unencumbered fun.

Les Sharp and the Twin rolling to a stop: 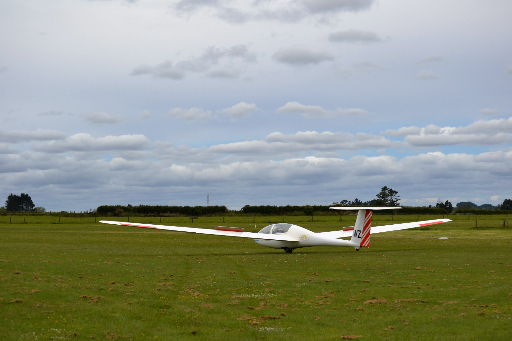 Now for height gains of a different sort. Two men working on the replacement of HT cables on the line down to the Power Station site at Port Taranaki. Prior to this the old cables had been inspected by the occupants of wee baskets cranked along the lines. Watching as the vertical insulators were negotiated was most engaging! 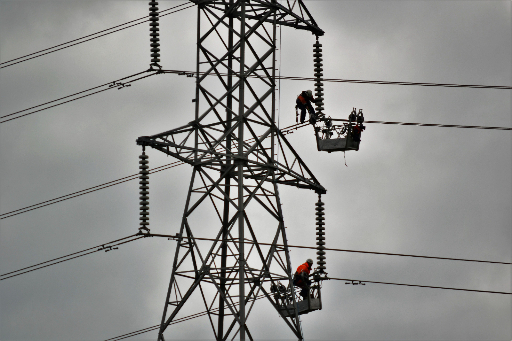 Cable inspection I'm not sure what would happen if he encountered a dodgy bit of wire! 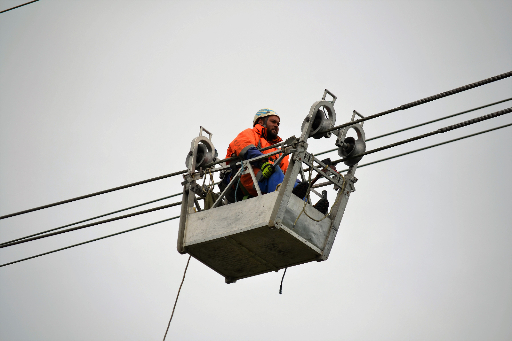