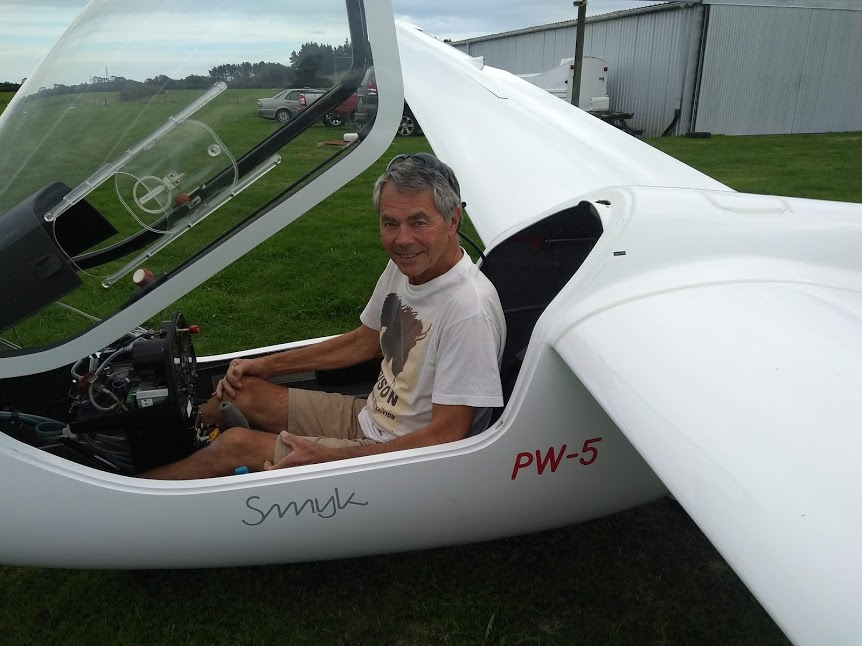 Our 'Round the mountain' maintaining affinity with the PW5.

Some indication on Feb. 3rd that the month might go well.  John Tullett had the good fortune to take a Qantas Air Hostess trainer for a flight.  No in-flight coffee for her though.  Kevin Koch and Clinton Steele who have transferred their flying to Stratford had a couple of check flights,  A couple of flights for Hunter Nunes-Vaz and also Liam Finer who is being quite assiduous in his flying.  As usual a good flight of over two hours in the PW5 for Dennis Green.  Tim took another trial flighter and then he and John Spenxce were away for more than an hour.  Six hours & forty-three minutes from ten glider flights. The day set the stage forthe next flying day which was a humdinger.

On Feb. 9th for once the day was in harmony with the forecast prognosis.  The Youthglide brigade did well.  Tim with Hunter Nunes-Vaz got forty-nine minutes, Nathan Whittleston just over the hour in the PW5, nearly on the hour for Tim with Isaac Burroughs who shoud be in Youthglide and three hours for Will Hopkirk in the Twin Astir.

Eyeballing this was Dennis Green who took the PW5 for a flight out towards the hills then flew around the mountain (see the map of his track below).  But his story comes first.and follows.

Saturday 9th February:The day had promise from the start and the weather gods all agreed. I arrive at the strip to find the tow plane absent, off on a mission somewhere I’m told. Pull out the gliders and DI the PW5, with the sky improving all of the time. At 1230 I am hooked on and towing out. We go through good lift at 1000’ but I am still at circuit height, patience, patience, and at 1800’ release in to 400 up. Turn back for it, where has it gone? I spend the next 20 minutes scratching and muttering and finally getting to cloud base at 3000’. From there on there was lift to be found with relative ease, good steady climbs and when pointing my toes between clouds often finding good lift in the blue. I make my way East, hear VV radioing his intent to try for Taumarunui. The reason for the scouting flight earlier becomes apparent. There is a little chatter from others poking around to the East as well. After a thorough inspection of the Douglas area and picking up another 2000 West of Mangamingi, I decided to head back towards Stratford with heaps of height and not a care in the world. I head towards Mt Taranaki and the GFA area and just on the park boundary climb to 5000’ so head in deeper towards the hill. Now it’s 6000’ and I am sharing the sky with XC and VW. I make my way towards the Pouakai Ranges and can see Okato through the saddle but cautiously turn back when I am over the swamp. Hang on I say, and turn back for the gap and am at 6000’ again. Do I stay or do I go? Go, prepared for an out-landing. With snow-grass on my left, trimmed at 70 knots to stay below a layer of cloud in front and the return point well behind me, I am now committed. The cloud dissipates, ease back to 65, best glide/speed for the PW5. So with one eye on the wingtip, one on the altimeter and one looking ahead, I’m sitting on 180 down in smooth as silk air. No lift but. The mountain appears to be a steep grassy slope as I transit around. Fanthams Peak I did not see, just more grass off my wingtip. No time for sight seeing. Check self, pulse, yup, breathing, yup. Oh, there is a ridge coming up with two poles on it. The ridge starts to go down and I get some very modest lift, gaining 200’, and slide comfortably over the transmission poles. So that’s where I am! Stratford Plateau well up above me, Stratford and the Strip off to the NE and I am down to 4000’. It could still be an out-landing. Out on the bush-line a nice core takes me back to 6000’, time to go home. I arrive back over the strip with 2500’ to burn off before setting up on the downwind leg. Flight time 2hrs 49 minutes. Best height 7000’. Time around mountain 7 minutes from ‘go’ to ‘made it’. DG. 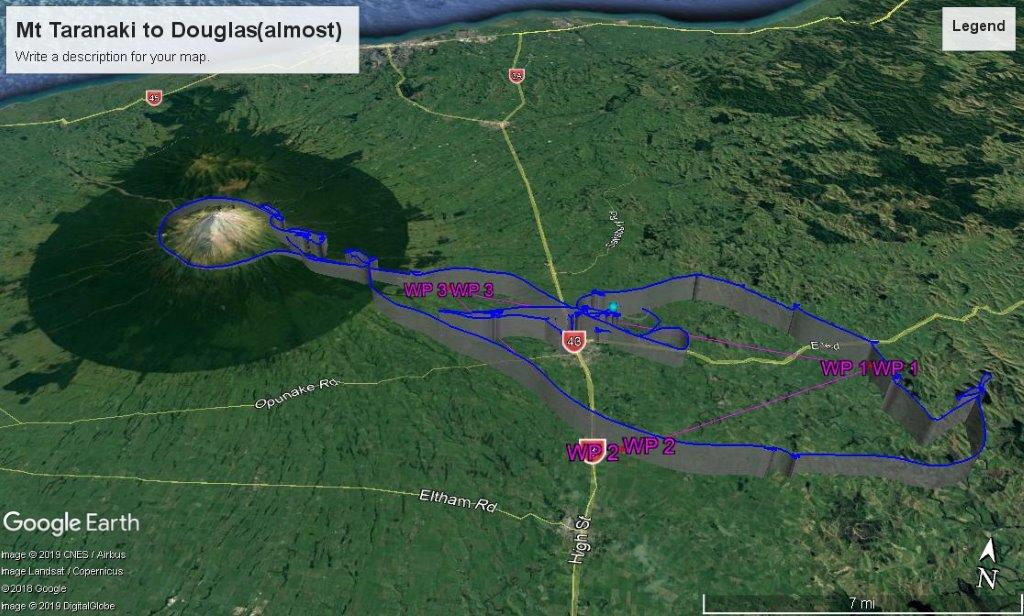 Then the private owners got to work.  One, who is quite shy about seeing his name inb print but owns a Ventus but his name is Glyn Jackson landed at Centennial Park Taupo.  He had first had a flight in the towplane to check out the line of travel and then set off.  Took him about an hour and twenty-four minutes.  The orevious one to do the trip east out of Taranaki was Craig Emeny in his Cobra c.1986. but   Flew out to the Waikato then returned to Norfolk back to Norfolk.  I had been writing all this straight onto the website but left it too long before I hit the save button and lost the whoke bloody lot so I had to start from this point again.  It's a cruel world.  Les Sharp had two and a half hours in his ASW20 flying out towards Whangamomona and two hours for Tim in the Discus XC flying at times with Les.   Clinton Steele in his ASW15 GN towed out of Norflok had an hours flight, landed at Stratford where his glider is to be hangared and went home to milk.  Kevin Koch in his ASW15 KB got away out of Norfolk on his second attempt and also landed at Stratford where his glider was to be hangared.  Twelve fights with nineteen hours and seventeen minutes glider time.  Over nineteen hours soaring for the day!  The Ventus retrieve from Centennial Park airfield Taupo,  was an epic saga taking a.bout twelve hours.

Feb. 13th was a good day too.  Fewer flights but good times.  An hour thirty for Clinton Steele in GN ( Stratford is a good place Clinton!), nearly four fours for John Tullett in his K6 ET, an hour forty-two minutes for Will Hopkirk in TE while Dennis Green had to make do with the Twin Astir but still managed nearly two hours.  Tim Hardwiick-Smith and John Spence in the Janus NN showed each other how soaring is done for nigh on three hours. Five flights for the day and eleven hours fifty-nine mi nutes. with

Feb 17th a bit different though.  Youthglide flights for Liam Finer with Peter Cook in WZ and a second T/F for Jim Nunes-Vaz, again with Peter Cook.  Tim took Dennis Green for a check flight and then a short flight for Peter Cook with John Spence.  Six flights and one hour twenty-five minutes was the total time that day.  Slim pickings compared to the previous days.

25 Years Back.  February Newsletter:   A report on the Matamata Camp described some of the activity there.  A C Certificate for Graeme Eason our AirNZ pilot(getting sunburnt in the process), Graeme, Mike Gibson and Peter Miller attempted their five hours but were called back after they'd done aout four hours because of an approaching squall line.    Ten members at the camp.  Malcolm Browon to the instructors panel, Kevin Wisnewski cleared by Matt Connor as a relief tow pilot.  A good write-up in the Weekender paper about an 'over 50's day we would run.  The first day was good enough with Batch Collins our fist CFI having a flight with John Tullett.  He had 2600 hours in his logbook ranging from a T31 to Mustangs and Vampires.;  The next day was a fiasco with a dilatory instructor reluctant to leave the Cheqers van.  The day scrubbed at 2pm. and people still arriving.  The next day was much better with 32 flights and a three hour waiting list.  A day at Norfolk went well enough, a passenger rating for Grant Wisnewski and his uncle Berwyn Wisnewski trying out his Skylark 4 there.  Went well enough.  The first 'over 50's' day notable for a flight by a paralysed patient from Chalmers Nursing Home.  His morale and demeanour improved immensely for a long time afterwards.

A good and busy month.  Some good flying done.