Clinton Steele walking his glider back to the hangar

The lead story this month is Clinton Steele's account of his flight from Tauramunui to Stratford.  An epic tale describing quite vividly how the flight came to be and how so often the decisions are made to achieve a memorable flight like this one.

The trip to the expansive Taumarunui airfield by the Taranaki and Taupo gliding clubs was a great time.

I didn’t count them, but would guess attended by about a dozen gliders. I met up with Dennis Green and the Johns Carter and Tullett around 11am.

We rigged the PW5, K6, Discus and DG100 launching later in the afternoon into a good cumulus sky.  I was keen to head over to have a look at Ngauruhoe and Ruapehu. I got a pretty good look and took some photos and after about two hours headed back to the Taumarunui airfield, landed, tied the gliders down and headed out to the RSA for another great steak meal, a few drinks and good compa 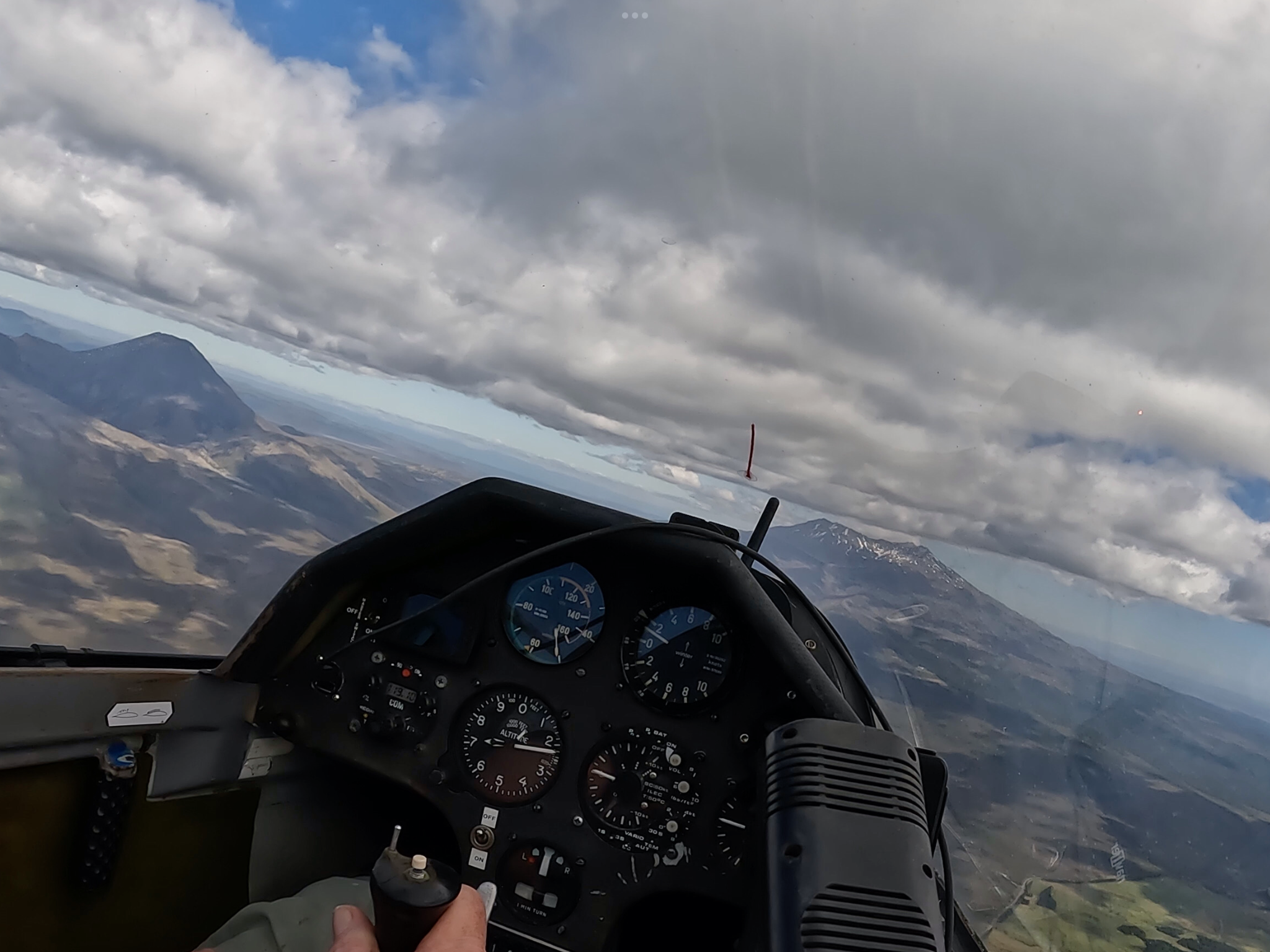 The next morning we gridded the gliders and after a short wait for the tow plane battery to receive a charge we launched.

I was first to go and immediately off tow got a great climb to 6000’ASL. I headed aimlessly out following the energy lines towards Mokau and then noticed that the clouds in the opposite direction looked much better, so after 30minutes getting to the better looking clouds I discovered that they were just the same as the other clouds.  Ok, that was an interesting fly around.  Now what?

An easy glide back to Taumarunui, but I can see Mt Taranaki in the distance, hazy and hot looking.  Lots of cumulus,streeting almost all the way across the steep and bush clad King Country.

Fly back to Stratford across the King Country? in a glider? Crazy idea? Probably!

As with all large life decisions, the usual way I decide is, stuff it! Let’s do it! So with Mt Taranaki on the nose of my new Discus, 5000ft of summer air between the glider and ground, a good looking sky ahead, fhe decision was easily made.

An amazing landscape slipped away underneath me, with a few thermal turns to make sure I didn’t have to get too close a look. More than half way across, looks a little more blue than I would like as we approached Taranaki airspace, we still have at least 20NM to go under weaker looking weather.

Ok, committed to Stratford airfield now, Oudie says we will arrive at 1500AGL, that’s good, have another squint at the Oudie.

It actually says will arrive -1500AGL, not good!

I still have plenty of height but the day is cooling, and clouds seem further apart now.

After 15 minutes of flying direct toward Mt Taranaki and taking all the thermals available we are still over 5000ft and Oudie has calculated our arrival at 2500ftAGL.

So, relaxed now and with Stratford airfield within glide, speed up to 90/100knots.

Landed at Stratford, pretty pleased with the flight and the new glider, although it was a strong day and I think I could have done it in older types like the ASW15.

Les, Peter Cook and Peter Williams were there, a little surprised to see me - maybe.

Les kindly agreed to fly me back to Taumarunui in TGC to collect the car and empty glider trailer. Thanks Les.

Then it was back to the RSA for dinner with the glider crowd, and a drive back to Taranaki the next day.

Now for what happened at Stratford.

8-Jan: Notably a 1st Solo for Trent Lochhead.  A fitting reward for his regular attendance and application to his training.        Cross countries for Ollie Smith with Tim Hardwick-Smith, as well for Les Sharp, John Carter and Clinton Steele.

Instruction for Caleb Finer, whilst Will Hopkirk shared a 50m flight with Peter Williams.

15-Jan:  A trial flight and Simon Craddock came for another instruction flight.  The Cook / Williams combo treated themselves to a X/C flight.  But all the action was at Taumarunui and the Stratford day was enlivened by the arrival of the arrival of Clinton Steele, treating himself and his Discus to a X/C from that airfield.  Les Sharp took him back the so he could (ostensibly) collect his car and trailer but more likely another steak and beer meal at the pub there.

23-Jan:  Details for this day surfaced from left field.   Four good X/C flights were had.  Where they went I’ve no idea but they did come back.  Another good solo flight for Trent Lochhead.

29-Jan:  A musical chairs day really.  Jim Finer and Tim Hardwick-Smith took turn-about at towing duties.  Tim with John Tullett likewise with instructing and Jim swapped with Trent Lochhead at being at being pupils.  Four flights for the day.

The Multi-Class Nationals were held at Matamata during the latter part of January.  The club was well represented.  Ross Perry (20th place), Peter Cook (23rd place) flying in the Racing Class.  In the Sports Class, flying the flag, (aka the PW5) was Dennis Green who placed fourth.  John Tullett retired early to go home and have a partial knee replacement. For Auckland, Sam Tullett flying a Discus 2b was placed 11th.  Ross Perry returned home ‘absolutely exhausted’!

So ended a busy period.  Activity in all directions and quite successful too.  The Central Districts comp at Greytown would follow the next month.