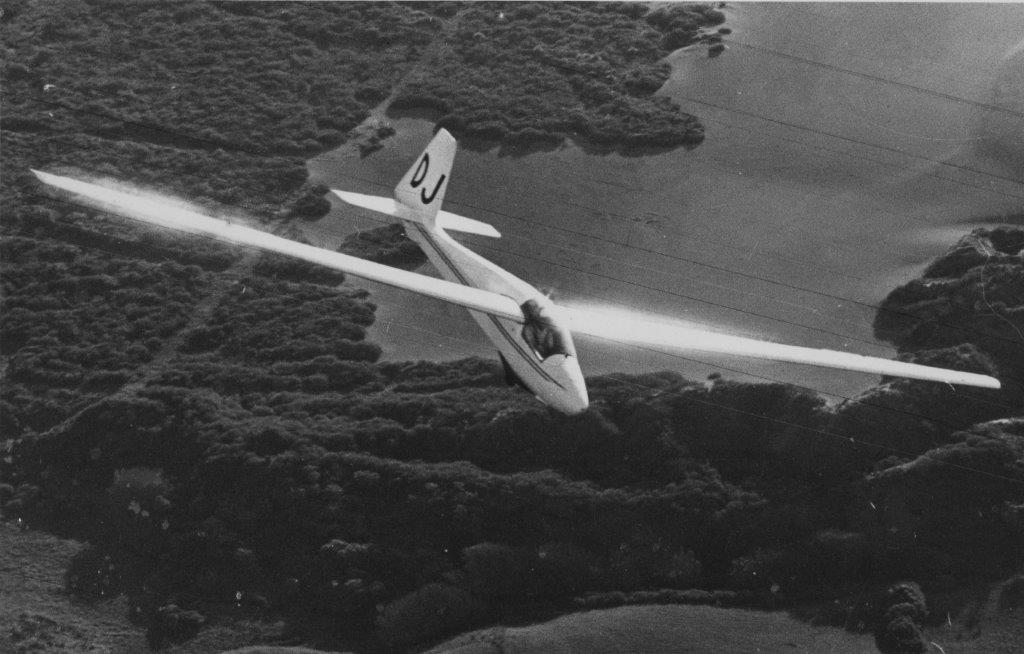 A photo from 1968 showing Bob Struthers in DJ, an Olympia 463 purchased with money earned frpm  a car rafflle.  Quite illegal at the time.  Nice to fly, a bit sensitive on the elevator.  The aircraft brought up to Stratford by the Upper Valley club during their visit and the purchase completed on the airfield.

Wave was forecast for last Saturday so some intrepid souls turned up.  What followed was quite rewarding though it was a bit of a struggle to get there.  A good initial trial for the tow plane.  The airfield is still too wet for the two seaters.  Below are a couple of stories of derring-do from Les Sharp and Peter Cook.

First off is Les Sharp –

On arriving at the field, it appeared that flying was on and wave was evident, so instead of helping with trailer modifications I offered to tow, but was usurped by Tim. TE was duly DI’d and towed out, but there was a further delay when I realised that I didn’t have the Oxygen system. That was duly collected, tested and set-up in the glider. The aerotow out to the park boundary was rough. On looking back, there was a northerly component coming around the north of Mt Taranaki and a southerly component coming around the other way and we were flying through the committee room in the middle of a hostile meeting! Off tow at 4000’ over the park boundary near York Rd quarry, and the vario would point straight up or straight down. I managed to hold release height for a few minutes but the downs were winning so I headed back towards the airfield. I opted to fly the circuit at 60 knots and had plenty of height for the final approach and landed further along the runway than normal. I was glad I had more than adequate margins; a normal circuit wasn’t a safe option.

After a break, during which there was enough rain to the northwest to consider that the day may be over, it cleared again, so having ascertained that no one else wanted to fly the glider, I tried another tow to the same area and released with another 500’ to spare. The tow wasn’t as turbulent as the first one, but after release the vario only pointed down and there was a race on to see if I could reach the circuit. There was a time where I was contemplating that paddocks west of Midhurst may require serious evaluation. Down to 2400’ and I located some lift that I could turn in just out from 09 threshold. The lift became smooth for a time, but soon degenerated to rotor in front of the cloud. Working this I managed to get above 4000’ in a steady climb, so changed the radio frequency and called the New Plymouth tower and got a clearance to 5000’.

GYT did the same shortly afterwards and although I looked around, it took me a while to pick him up above the cloud downwind. White gliders tend to be well camouflaged when the background is white cloud. By then I was established in the wave and with successive clearances I worked my way up to 7500’. Although it was reported that the lift went as far South as Eltham, I seemed to run out of it as soon as I attempted to go south of Stratford town-ship. From that point I decided to push forward to see if I could find some primary wave. It proved to be a do-or-die effort with the latter prevailing, and while I got back with plenty of height, I called it quits and joined the circuit. At this time the wind had got up to around 30 knots at ground level, someone tried to call me on the radio, I couldn’t interpret what was being said, but the fact that on crosswind the track was towards the wingtip was enough to call for a modified circuit. By the time I started my turn downwind I was already at the end of the downwind leg. I got to finals with plenty of height and maintained 65 knots all the way to the flare. The ground roll was short, and it was obviously unsafe to try and get out, so thanks to the ground crew, the glider was towed in and hangered with me still in the cockpit. I have never had to do that before.

A great experience to add to the memory bank of good flights.

Here's the stats after NN trailer man Tim pulled us off a firm-ish 27 well into light rotor affected SW to WNW jumbles over Midhirst.  My Oudie was not too hot on wind direction - looked like it was streaming from NP, always shrouded in cloud.

Primary was obvious near Mt Egmont early on with a faint secondary over Te Popo-Toko extending east of Eltham.  The secondary proved 2 to 3 kts so edged up to 4500' and with the odd push forward into increasing rotor to contact the primary, but to no avail.   Saw TE much higher tracking Egmont - gee!.

Had to worked harder now so drifted down wind to find tops at 8000' to push from - still no luck!  The temperature was a couple of degrees above zero, but a good warming sun.   Was in smooth air and I could make out a carpet of waves over to Ruapehu.   Could see contrails and vivid blue above.

Great wee secondary runs and with clearances from NP tower but the fohn gap shrank as both wind speed and moisture increased but left a well-defined Te Popo-Midhirst-Monmouth to Eltham hole to zip around.   5 to 8 kts up in places and rough rotor west of SH3.

The threat of an advancing squall line from north and cell phone calls from the hangar brought a close of a soothing 3hr wave dance to mid-afternoon.  It is wave season and SW to N winds do the trick if coolish laminar conditions are about.

No flying on the 16th but the Janus was rigged and is ready to go.  And the trailer modifications had the finishing touches completed.

At the AGM last week saw a comprehensive account of the club year from John Tullett and Tim Hardwick-Smith.   The committee stays the same with people in the same jobs and John Spence comes onto the committee

Stats for the year were:

The economic cost of TGC was favourably commented on as was the use of the Hardwick-Smith airstrip at Mangamingi.  Also the thorough work done on club gliders by Michael Strathern.  Lack of new members a concern.  Some excitement expressed at the arrival on the scene of the Janus  .A move to add $5 per thousand feet of aero-tow to build up a fund for engine replacement was suggested.

A visiting aircraft tried an uphill take-off and suffered a prop strike in the N/S swamp.  Should have observed what the club was doing on the day.

The 1000 hour check for the tow-plane BRY was completed in Paul Muller’s hangar.

At the October monthly committee meeting it was resolved to stop selling T/F vouchers but instead opt for on-field provision of trial flights on the day.  The cost to be $100 and is a 50/50 scheme - $50 for the flight and $50 for temporary membership.   This is in force from now on.  T/M’s under the current ‘intake’ have their term extended to December 31st to allow for the paucity of flying over recent months.  October so far is not much chop in that regard either.

I’ve heard that Taranaki Flight Tech may have moved (or will move) to Norfolk Airfield.  They might nearly have come to Stratford.