Turned out to be an epic day for some with good long flights.  Les Sharp reports –

With the promise of a good convergence, four instructors (one not quite current), four tow pilots and a glider pilot arrived to start the day; and that was six of us!

I was nominally the duty instructor, but as that only required maintaining a watch over the two solo pilots there really wasn’t much to do other than take the opportunity to grab a glider when available and do some flying. The gliders WZ and TE were DI’d and taken to the threshold of 09 as the wind was a light southeasterly. Tim Hardwick-Smith followed us out with XC. Jim Finer was the tow pilot. John Spence was first away in WZ and found enough lift under the convergence to stay up for 64 minutes. I was next in TE but could only manage 47 minutes. By the time I got back the wind was a fairly brisk southwesterly and although I chose to practice my cross-wind landing skills on 27, life was easier for those who landed on 16. Tim was soon up to join us in XC for a while, but soon disappeared into the distance and returned to earth 3 hours 20 minutes later. Next was Glyn Jackson in VV and he went off exploring for 4 hours 10 minutes.

Dougal Wickham took TE up and enjoyed his longest flight to date, 3 hours 10 minutes. I was next in WZ and this time the convergence was more reliable and I got off tow over the north end of Stratford town. Once I got a good climb, I headed towards the mountain, but the cloud-base was only 3900’ and although I had a brief sojourn over the bush-line the vario started making unhappy noises, so I headed east and cruised most of the way out to near Gane’s airstrip. Twice I ventured further east but quickly found sink. On the third attempt I got to a point north of Douglas and a similar distance west of Te Wera airstrip (this was the furthest distance that I have flown from Stratford). Again the lift wasn’t working and I was losing height, so headed back, flying conservatively, until I got back to where the lift was reliable. By then my sitting bits were fairly numb and nature was telling me something, so I descended on the non-traffic side in a couple of large orbits at around 80 knots. On the first orbit I encountered some reasonably severe turbulence, so was pleased that I was keeping the speed in the green range. Landing was 1 hour 26 after take-off and I felt satisfied.

After that John Spence took WZ up, and I took some fuel cans to Z and filled them while he spent 39 minutes airborne. By then the system was showing definite signs of decay, so it was time to put everything away again. John added up the times and the total was 14 hours 36 minutes. Probably one of the best day totals this season.

Would be nice to hear the stories on how the other pilots did – until diuretic effects forced them back to earth.  That day probably one of the best since October 1988.

There was some hope therefore that some flying scheduled for Friday the 26th would be quite good too.  It wasn’t.  By the time the hoped-for good conditions had arrived, the tow-pilot had gone.  So that was not so good.  The aircraft were put back in the hangar then another tow-pilot arrived.  That was good but by then it was not so good.

So they all went home.

There is mooted however, a likely trip to Taumarunui.  I see that the Met Service forecast looks quite reasonable.  It would be equally reasonable to firm up the plans earlier than later.  Here are some cogent words from the Club Captain –

The TGC committee is postulating a club trip to Taumaruni on a weekend with a good weather forecast.

Taumaruni is approximately 149km (2hrs) drive from Stratford, or approximately 35 minutes ($88) each way as the tow plane flies, so there are options for staying overnight, commuting or joining for one day.

There are also options of car pooling (or even plane pooling as many of our members have access to power aircraft).

Historically I have camped on the Taumarunui airfield next to the excellent clubhouse, there are also accommodation options in the town itself.

There are a multitude of things to organise for a club trip (including figuring out likely demand for gliders, how many gliders to take, and how to get them over and back).

Appreciated if you could reply to me (not all), with your tentative indication, so that we can gauge tentative attendance and thus number of gliders etc and determine if the club trip will go ahead.

Response 1:  Yes I am potentially interested in either weekend.

Added to that exposition there will be an additional charge to cover TGC ferry costs which shouldn’t be all that great, given a good attendance.

Since the airfield was built for DC3 aircraft there is plenty of room on a runway which is some 1300 yards long.  Slopes from 600ft asl to 640ft asl at the eastern end. Situated in a large basin with the surrounding hills rising to nearly 3000ft asl, there should be some good thermal activity as the day warms up.

25 Years Back: The club ran the Hospitality Tent at the NPAC Airshow in mid-Feb.  A highlight of the show was the Spitfire aerobatics by Tim Wallis.

Banga Martin had died recently.  I remember his advice – “If you must defy gravity, then obey the rules”.  He got the club back into aerotowing by enlisting the help of Bob Shewry who flew his Tiger Moth ZK-AJP  in from his farm at Tahora.  And he set a firm instructional standard after the Rhonlerche GCI had endured a series of prangs in the preceding years.

The Standard Astir GNG on tow to Drury for repairs after a heavy landing, nearly needed more after the trailer A frame collapsed whilst traversing Mt Messenger.

On the things woeful note, the tractor caught fire whilst being refuelled and with the motor still running!

And at the club-house, a new toilet installed and cistern connected. 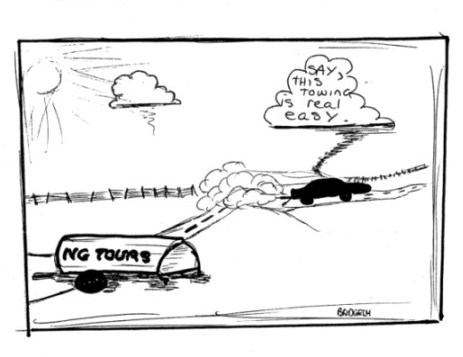 I think Rod Smith was driving the car.  His lucky part of the day was to find a mechanic at Uruti.

Postscript: Looks like we may have missed a good day at Stratford on Sunday 28th.  And the Grey Ghost's trailer now in the hangar.